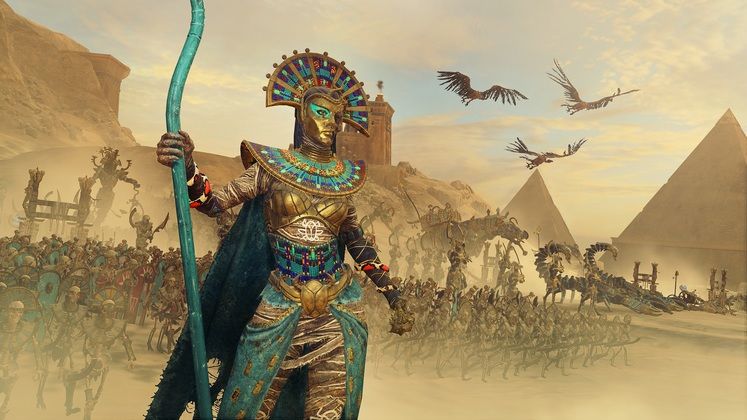 The first Campaign Pack for Total War: Warhammer 2 is all about the Tomb Kings, the Egyptian-inspired undead faction based to the south of the Great Ocean of Ulthuan. An once great and majestic culture, the ancient human empire was cursed by a Necromancer and turned into living dead.

Thanks to rituals embedded in their culture, the spell backfired and gave the Tomb Lords control over death, and after a millenia of slumber, they have awaken. Focused on returning back to the living and enjoying the pleasures of existence again, the Tomb Kings will stop at nothing to regain their former glory – and that’s where Total War: Warhammer 2 - Rise of the Tomb Kings starts. 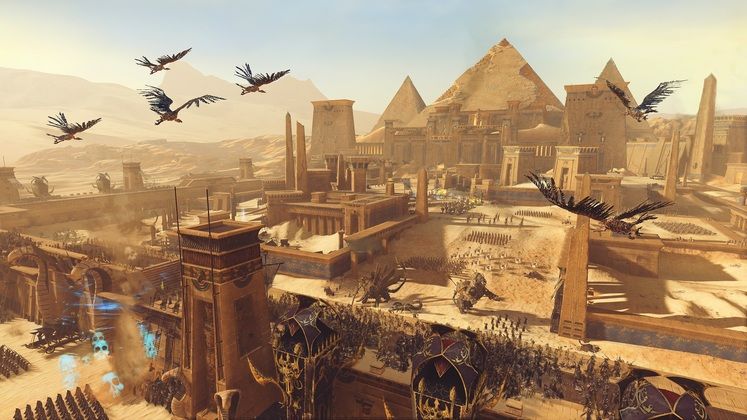 Putting you in control of one of four new Legendary Lords – Settra the Imperishable, High Queen Khalida, Grand Hierophant Khatep, and Arkhan the Black – it is your job to gather five of the nine books of Nagash and unlock access to the Black Pyramid that holds the key to their immortality. The DLC takes place in the same map as the Eye of the Vortex base campaign with the same factions across the world, but due to the Tomb Kings’ singular obsession, the Great Vortex up north is of little concern – rites and incantations are summoned through the Lore of Nehekhara instead of the huge blue swirling maelstrom of magic.

One of the greatest strengths of the DLC is its varied roster, containing multiple variations of skeleton infantry and a number of massive creatures made of marble and stone named War Constructs. Fear-inducing and absolutely deadly, Tomb Kings units change the way Total War is played by not requiring upkeep nor bearing recruitment costs. Instead, all but the basic units are limited by the number of special buildings, forcing you to expand if you want to field more of them. 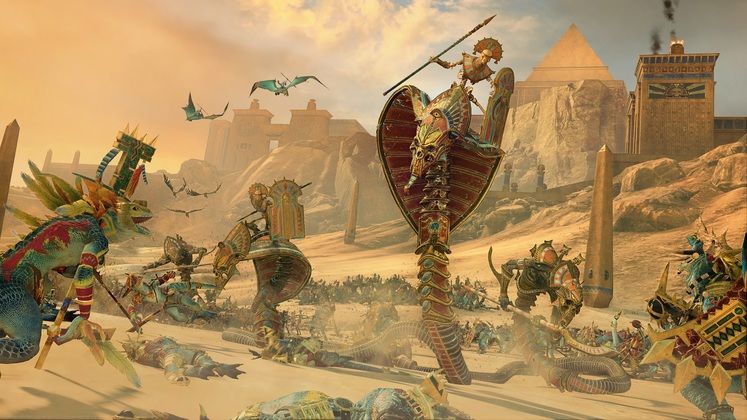 During battles, all Tomb King units induce terror and shake enemies’ morale while being immune to fear themselves. Unbreakable, the armies of Nehekhara never rout, and instead completely crumble if their Tomb King is defeated. As their units fall, however, a bar representing the “Realm of Souls” fills at the top of the screen – souls of fallen warriors slowly charging up the magical dimension of the dead. Once one of its three thresholds are achieved, a mass wave of healing and resurrection cascades through the army, bringing dead troops back to undeath. Once the bar is filled, you are able to summon powerful Ushabti stone guardians anywhere on the battlefield, providing a massive tactical opportunity unlike anything else in the game.

Finally, Rise of the Tomb Kings further expands Total Warhammer by the addition of the Mortuary Cult, a sort of crafting system that unlocks items, units, and abilities. Requiring gold special resources, and Canopic Jars – containers full of viscera and organs gathered from living beings and used in rituals – the feature forces players to expand beyond the deserts of the Land of the Dead in order to secure the components to craft the most powerful items in the Priest Kings’ repertoire. 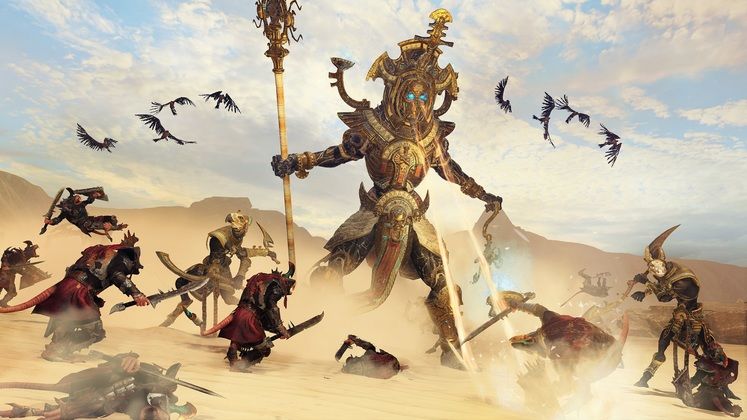 In the end, Rise of the Tomb Kings is hands down the best DLC I’ve ever played for Total War: Warhammer. With a fantastic amount of themed changes and features, the DLC perfectly immerses players on the experience and genuinely creates the feeling of raising an once-majestic empire from the sands of time. It’s as it should be – Tomb Kings do not serve. We rule!

Rise of the Tomb Kings is the best DLC of the Total War: Warhammer franchise so far.

Shattering three Skaven units in a second with the concentrated fire of a dozen Screaming Skull catapults.