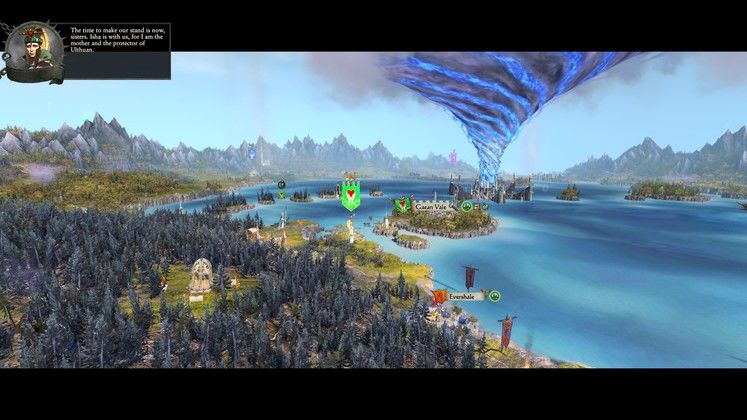 Total War: Warhammer II is a really good game, and it’s first DLC Rise of the Tomb Kings was the best expansion so far in the fantasy franchise. Now, the folks at Creative Assembly are back with yet another Lords Pack, adding six new units, two new Legendary Lords, and several Legions of Renown to the ranks of the High Elves and Dark Elves.

So let’s cut straight to the chase: is The Queen & The Crone worth it? 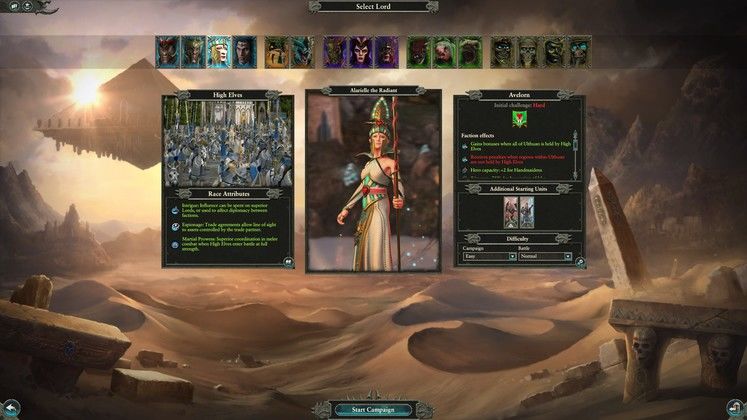 The first new Legendary Lord (or lady) is the High Elven Everqueen Allarielle, queen of Avelorn. The beautiful blonde shares the title of Defender of Ulthuan with her bae Tyrion, Heir of Aenarion and commander of the forces of Lothern. While Tyrion starts the game at the south of Ulthuan in the Straits of Lothern, Alarielle’s starting position is to the north of the Inner Sea, protected among the inner kingdoms.

Alarielle is a very unique Lord, possessing several faction effects not found in any other character in the Total Warhammer series. As the Everqueen, she is the embodiment of the goddess Earth Mother Isha, and values the integrity of Ulthuan above everything else. As such, Avelorn enjoys factionwide bonuses to recruitment and power if the whole of Ulthuan belongs to the High Elves – and great penalties if it does not. 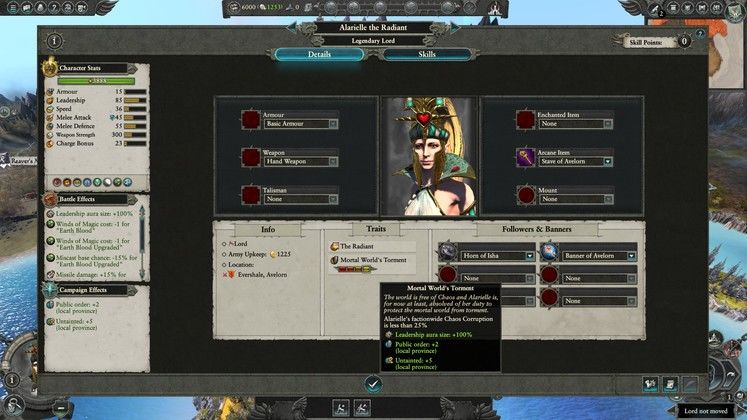 Likewise, Alarielle herself leaves lingering effects through every province she passes, bolstering public order and buffing the region, but she also gets weaker as Chaos corruption grows. As the world falls to daemonkind, the Everqueen’s strength is sapped, decreasing her her magical powers and increasing convalescing times, while boosting units stats to fight back against the heretic onslaught.

In battle, she is a powerful – if fragile – presence. Her abilities are capable of changing the course of a battle, almost rivalling Teclis in terms of spellcasting. As she levels up and unlocks quest items and campaign skills, the Everqueen makes a bigger and bigger impact in the game world. 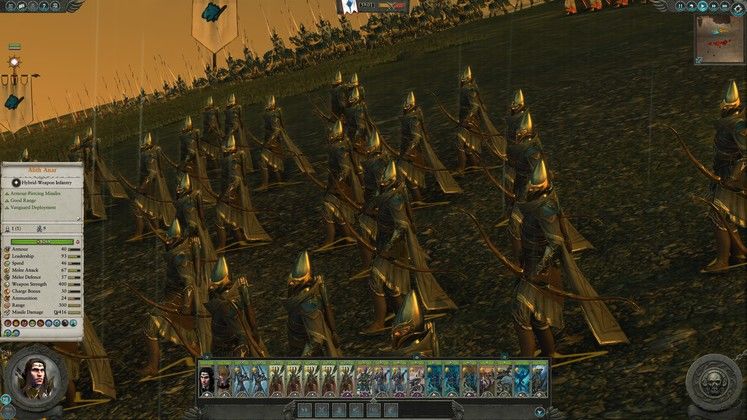 On the unit side, the DLC adds the Sisters of Avelorn – a elite unit comprised of women warriors of Ulthuan, armed with magical bows and extremely skilled with a blade – and the Shadow Warriors – ranger-like scouts who can deploy in vanguard mode and shoot undetected, firing in any direction even while running. Both units are extremely versatile, able to hold their ground against standard units and deal one hell of a punch into the enemy as they rush into melee range.

The last Asur addition is the Handmaiden, a hero unique to Avelorn. Those powerful ladies are part of the 100-strong bodyguard contingent of the Everqueen, and deal a lot of damage in combat while affecting diplomacy, trade, and influence during the campaign. One would think their size and skill would be better suited to a Regiment of Renown instead of a single hero, but eh, CA’s decision making can be weird at the best of times (looking at you, Vortex campaign and horrible non-coop quest missions in coop campaigns). 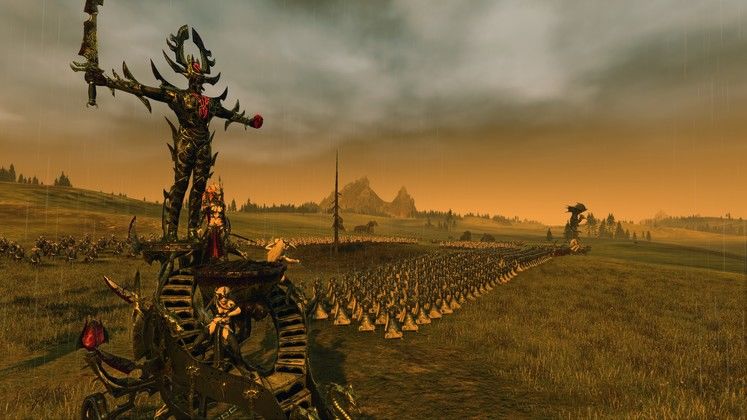 The darker side of the DLC brings Crone Hellebron, Hag Queen of Har Ganeth and a powerful sorceress second only to Morathi, Malekith’s mother. This cruel Dark Elf wizard can wipe out whole companies of soldiers while riding atop a terrifying (it literally causes terror) magical chariot called the Cauldron of Blood.

An old being beyond imagination, this Druchii ruler kills slaves by the thousands in order to fuel her power and eternal youth, through a yearly ritual called the Death Night. This is represented in-game by a new use of the slaves resources, which must be acquired via battles and captured settlements and sacrificed by the droves every so often lest huge penalties apply. While the fully rejuvenated Hag Queen enjoys several factionwide bonuses such as extra income, public order, and unit’s battle performance, a drained old hag is unable to keep their murderous society together and loses all vigour, entering battles “Very Tired” and suffering several harsh penalties to nearly every aspect of the logistical campaign. 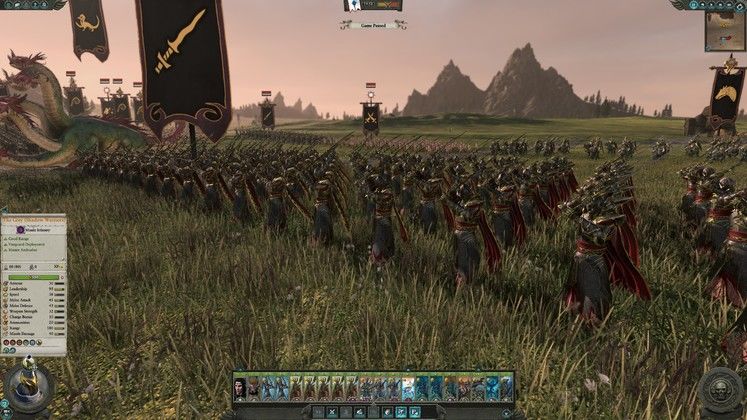 On the unit side, the DLC adds the Sisters of Slaughter and the Doomfire Warlocks – murderous poisoned whip-wielding lady gladiators that cause fear, and an elite spellcasting magical cavalry that deals both magical and poisonous attacks in melee. As with Avelorn’s additions, these new units are much more powerful than standard units, and can be devastating on the battlefield.

Hellebron also gets a unique lord to offset the Asur’s Handmaiden hero, in the shape of the Supreme Sorceress. This new category of caster lords can be recruited to lead armies; are capable of wielding the magic lores of Fire, Dark, Shadows, Beasts, and Death; and can ride anything from a Dark Steed or Cold One to a Dark Pegasus, Manticore, or even a Black Dragon. 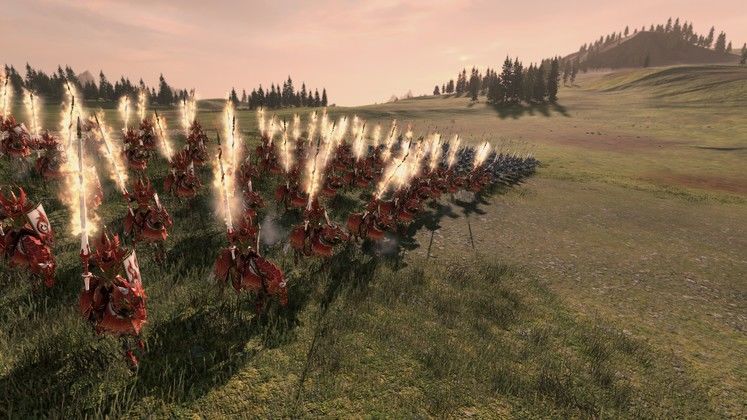 The DLC adds 16 Regiments of Renown to the High Elves and Dark Elves factions, filling a gap that’s been in the game ever since launch. Like most RoR, these new units are vastly powerful variants of existing units that often possess unique abilities, such as fear inducing Lothern Sea Guard or Dark Riders that use pegasi instead of horses.

Aside from the awesome looking and very effective The Fireborn Dragon Princes armed with anti-large fire lances, my favourite Regiment of Renown was the Keepers of the Flame Phoenix Guard, which deal magical attacks and burn the enemy every time a soldier dies – the Phoenix Guard is already the most reliable Asur unit which rarely suffers casualties, and that Mark of Asuryan ability guarantees they’ll take the enemy with them if they do. 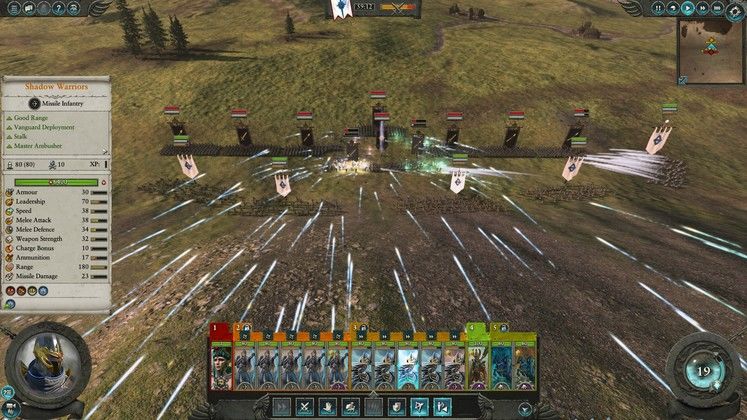 So is it worth it?

In terms of production values, The Queen & The Crone is a very capable endeavour – the new features deepen the already fantastic asymmetry of Warhammer II’s campaign, and both Alarielle and Hellebron succeed as heroes and characters. Their campaigns offer very different experiences, both to each other and against the vanilla factions – while Tyrion is a confident and impulsive warrior focused on aggression, Alarielle is peaceful and introverted with a focus on defense. Similarly, Hellebron has a much more aggressive playstyle than Malekith’s and his mostly stable-if-not-really Dark Elven society.

Like every Total War DLC, the main draw behind each expansion comes down to how much you like the specific theme. The Queen & The Crone not only add new Legendary Lords, but it also brings Regiments of Renown to the Elven races for the first time in the franchise. If you play as the High Elves or the Dark Elves, this DLC is a no-brainer.

A fantastic addition to any Asur or Druchii player.

Letting loose half a dozen Sisters of Avelorn magical bolts down on incoming Dark Elven army and annihilating them before they got to the foot of the hill.