Total Warhammer! We’re the first ones to make that joke, right?

You build your spearmen in a defensive line, backed up by waves of archers, but you weren’t prepared for what was coming over the hill. Hordes of shambling zombies, waves of trained skeleton warriors and massive, batlike horrors. The men are already shaken before a blast of dark energy shoots across the battlefield, decimating one of your units. Swarms of bats fill the skies, rushing in on your troops. You say a few words to help the men regain their courage, and let forth the command: “charge!”

Total Warhammer! We’re the first ones to make that joke, right?

This is what Total War: Warhammer is best at. Massive battles between fantastic armies, with just enough reality to its units and tactics to make the monsters believable and the fights mesmerizing. I haven’t played a Total War title since the original Rome, but Warhammer’s unique blend of realistic tactics and fantasy factions has made it a captivating game of strategy.

True to the formula, Warhammer’s campaign is split between two gameplay modes. On a turn-based, Civilization-style campaign map, you’ll manage your empire, raise armies, and deal with other factions. There are far too many mechanics to go in-depth on everything that makes the campaign tick, but expanding your influence is a careful balancing act that requires specific, thoughtful expansion. 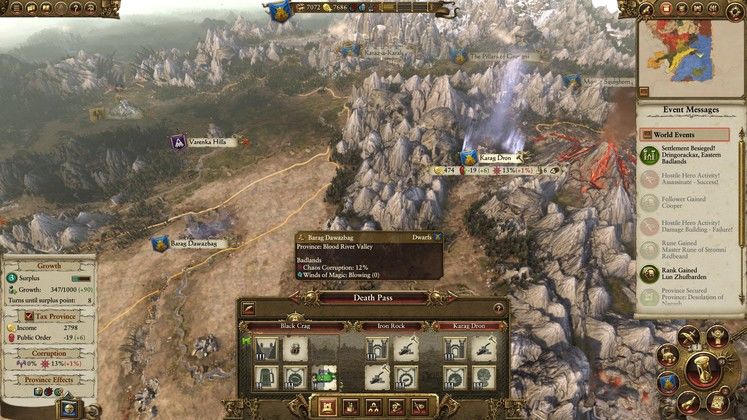 Expanding too far, too fast will leave you unable to adequately defend your frontiers and unable to manage public order at home, leading to rebellions and a loss of the funds necessary to muster your armies. Corruption caused by close borders with certain factions can cause things like undead uprisings, which the local populace is obviously going to be unhappy about. You can form alliances and make treaties with other powers, but the name of the game is Total War, and every action on the campaign map is ultimately about ensuring that your armies are well-fed and well-funded when you march on the enemy.

Combat is the heart of Total War, and battles are resolved in real-time. Positioning your units and flanking the enemy are key to victory, and you can often win despite numerical disadvantages by using smart maneuvers. Units not only have a health meter which indicates their general wellness, but a leadership gauge which dictates their morale. Even if your soldiers aren’t wiped out completely, once they’ve lost the will to fight they’re going to try to escape the battle. Success isn’t a matter of annihilation, but of breaking the enemy’s spirit and routing their forces.

Looking for more great Strategy games like Total War: Warhammer? Check out our list of The Best Strategy Games on PC! 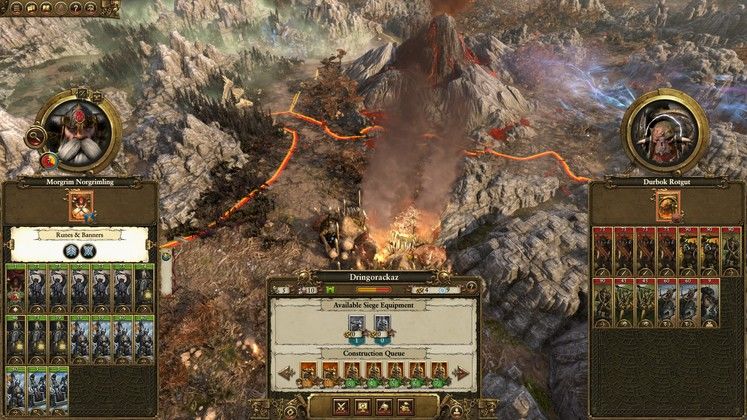 Of course, that’s familiar territory for fans of the series, and Warhammer differentiates itself through each faction’s unique units. Early battles as the human Empire are basically identical to the historical battles Total War has always portrayed, but that starts to change once your cavalry is mounted atop a group of flying pegasus and your frontlines are supplemented by magical boosts to their willpower. Other races require completely different tactics and playstyles. The Vampire Counts can send forth hordes of expendable zombie units to overwhelm the frontlines and spread fear to the enemy, while the better-equipped skeleton warriors hold back to finish off the half-broken survivors. The Greenskins are built on waves of quick, maneuverable Orc warriors, and my favorites, the Dwarfs, favor defensive warfare thanks to their slow-moving, heavily armored infantry.

The basic tactics are still effective, but the new unit types change how you have to consider each battle, and despite the relatively small number of factions, the variety of tactics each employs means that they all play completely differently. You still use cavalry to flank and harass the enemy, but now flying cavalry can get behind the lines even faster and easier–but they’re far more vulnerable to missile units. Monstrous enemies like trolls and giant spiders can decimate a line of infantry. Keeping your lords close to the front to inspire your troops is even more important when you’re dealing with undead which will sow fear among the men.

Lords and heroes represent another big change for Warhammer. Not only does their presence inspire the troops, they have unique abilities which can change the course of the battle. They’re also incredibly powerful in combat, and a strong character can take down entire units single-handedly. Winning battles will net your gear to equip on these characters, as well as experience that feeds into an RPG-like ability tree. Losing a hero unit after hours of battling and upgrading can feel crushing, but it’s incredibly satisfying to take down an enemy lord for just that reason. 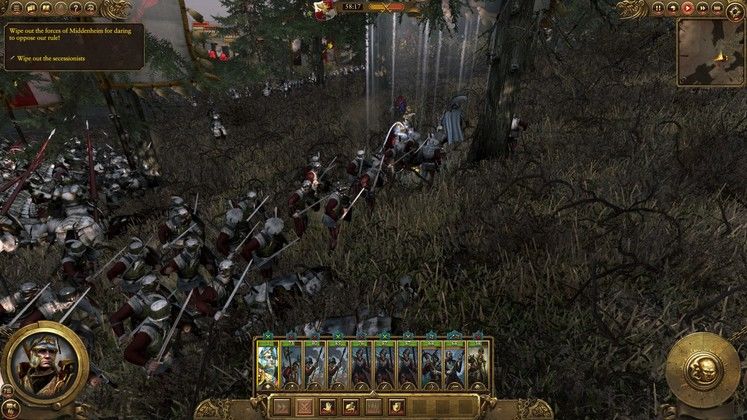 The campaign offers a loose structure if you’re interested in following a quest line rather than achieving sandbox domination. The quest objectives are all optional, but they offer short-term goals and context for what your actions mean in the world, along with providing powerful, unique equipment for your leaders. New players in particular should appreciate the bonus chapter objectives, which give a solid guideline of how much time to spend building infrastructure and upgrading units before attempting to expand.

If, however, you want to conquer Warhammer in your own way, those quest objectives are pretty much all optional–with one major exception. A universal threat arises about 100 turns into the campaign, and true to fantasy tropes there’s an evil overlord that threatens all the other factions. Whether you’re going for a short campaign or a long one and no matter what race you choose to play as, you’ll eventually have to venture north and deal with the threat of Chaos. Every campaign with every race has to end in essentially the same way.

The game offers multiplayer campaigns in 1v1 and co-op formats, as well as custom battles up to 4v4. While the developers offered to take part in custom battles over the course of the review period, we’ll decline to evaluate the multiplayer component until we see how the game performs on real servers against real players. 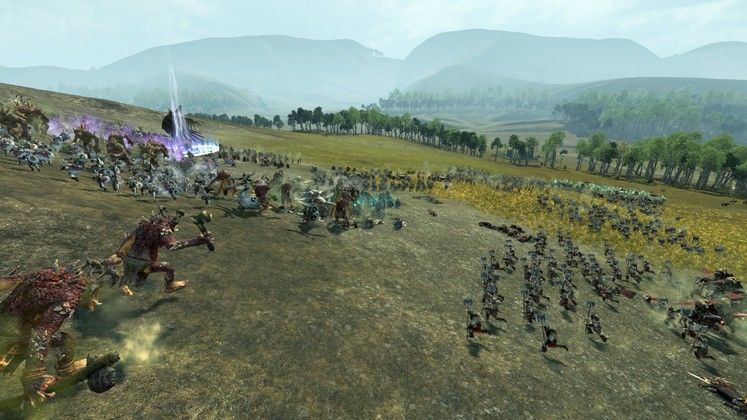 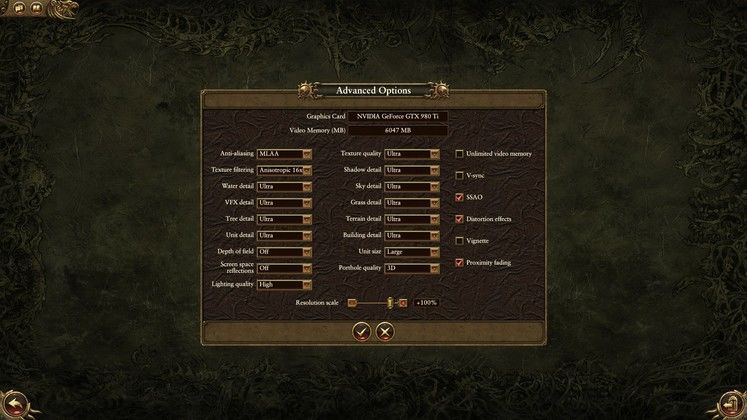 Most of our time was on a machine featuring an i7-4790 and a GTX 980TI, and as you’d expect, performance was quite solid here, with 60FPS or better throughout our campaigns on ultra settings at 1080. We did manage to tax the machine a bit with 4v4 custom battles, requiring us to drop settings to high or lower for acceptable performance, but you’ve got to go out of your way to offer a challenge to a high-end computer.

More midrange computers may struggle, however. An i5 2500 with a GTX 960 struggled to maintain 30FPS at the recommended high settings, and no amount of adjustment could get us to a steady 60.

Support GameWatcher and order Total War: Warhammer from Games Republic where it’s priced at 10% off for £35.99.

Despite performance quibbles and a repetitive endgame for the campaign, Total War: Warhammer is an exciting strategy game that stands on its own. The four factions offer unique playstyles with compelling strategic options, and the hero units, fantastic creatures, and monstrous enemies make for spectacular battles that are almost as much fun to watch as they are to command.

Watching your lord do battle one-on-one with with the enemy commander amid an epic battle, and seeing the enemy’s eventual defeat lead to a total rout of the enemy.