The transport simulation genre returns - but is it worth the ticket price?

As somebody who harboured something of an obsession with trains as a kid, when I heard about Train Fever, a new Transport Tycoon-like sandbox simulation game, I was interested. No matter how consoles have encroached on and better rivalled the PC in a variety of other genres, simulation games remain a staple of my PC playtime, and transport is an area that can be brilliantly simple on the surface but also with deceptive depth, allowing for a great breadth of gameplay options.

My curiosity was only increased by the interesting manner in which the game has come to be. Crowd funding is a pretty common - and sometimes groan-inducing - term these days, but the story with Train Fever is a little different. Rather than take to Kickstarter, Urban Games, the developer behind Train Fever, took it to Gambitious, a crowd funding website that's more for big-time investors looking for a return on their cash than gamers looking to essentially fork out a very early pre-order. The game raised the better part of €300,000 from a handful of serious investors, and is now in the hands of gamers via Steam.


Beginning in 1850, Train Fever tasks you with taking on the role of the boss of a fledgling transport company who can lay down various public transport infrastructure. A seeded world generation populates a map with a smattering of towns, and your job is to use road and rail both to link them.

Due to the early start date, you're at the onset using the most rudimentary of vehicles. It's quickly clear that things aren't just about trains, too - a train connection between towns can do roaring business, but only if a bus line - initially powered by horse and cart - allows users in each town to reach the station in a convenient manner.

Convenience for the AI people you're serving is of the utmost importance to consider. Each person is assigned a home and a workplace in the town in which they live, and other buildings in the towns are designated as places where people go for entertainment. All this feeds in to what'll happen with your transport - how far people are willing to travel for work or fun, for instance, will be directly influenced by your actions.

Right away the game throws you in at the deep end with the most basic of tutorials, and there's a hell of a lot to consider. For one, the impressive home-spun game engine allows terrain to be generated and customized in significant ways, and height levels and inclines are vital, as they are with real trains.

Building a track across or through a hilly area is not only almost prohibitively expensive, but steep inclines and the like will also effect the speed of trains, reducing their running frequency and thus cutting into profits. Smart building is encouraged rather than merely clicking the shortest possible route between two stations.

Handy overlays, such as one that shows the contours between different inclines and another that shows precisely what different sections of each town are used for by its residents, help the player to make smart decisions about where to place tracks, stations, depots and bus stops.


When that's done, there's further duties - buying, maintaining and upgrading your vehicles is a vital point, for instance. While I initially started out transporting carriages full of people from town to town and had to lay on additional bus and train services, I quickly began also transporting for industry with entirely separate trains, hauling material from mines and factories to other places on behalf of business.

As your rail network expands further, more road services will be needed with the option for better buses or trams, and on the tracks you'll need things like points systems and stop lights to prevent trains from colliding.

Out of your control are the towns themselves - as time wears on and you reach the 1900s and beyond they begin to very naturally expand and grow, roads snaking together and hooking up, new buildings constructed and populations appearing. As they grow, your infrastructure will need to be adjusted to withstand the additional load.

The complexities of simulation are piled on thick and fast - and I think that's by and large a good thing. I really enjoyed trying to keep up with what was going on, and I never felt at any point like I was being unfairly punished - something which can sometimes be a problem in this genre. Quickly the hours were melting away and I didn't really realize - and that's in spite of frustrations with a lack of information provided by the game itself.

You see, there's some seriously smart simulation under the hood here, and that makes the game's one significant issue all the more prominent - there's next to no hand-holding. I don't mean even the most simple of hand-holding here, either - this game is almost entirely devoid of help. It drops you in with such a lack of fanfare that after a few failed attempts to puzzle out the first steps of creating a successful opening to a game I had to seek out a tutorial written by a fan - and that finally set me on my way.

Even so, a lack of fan tutorials held me back from getting really serious with aspects of the 'late game'. The fact that this is purely a sandbox game with no campaign missions with objectives hurts that too - it's great to have freedom, but when you're given no direction, it's exceptionally difficult to learn.


The developers seem committed to adding to the game, however, and one hopes some sort of mission-based mode or a fully-featured tutorial rears its head at some point. Further, fully-featured mod support is also giving fans a chance to add new vehicles and tweak the game to their liking - and in such a fan-dedicated genre, that'll probably work out quite well indeed.

With that noted, it has to be said that there’s an awful lot to love here. It’s a smart simulation game with some really great use of modern horsepower atop the basic trappings of older games in a genre that sadly isn’t as active as it likely deserves to be. Just keep in mind you’ll need to go in with plenty of patience and a willingness to search outside the game if something obscure trips you up. If you can get past that, and you like a bit of simulation, you’re going to have a lot of fun. 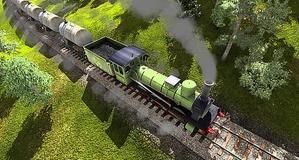