The Tree Of Life Strives On Planting Cooperation 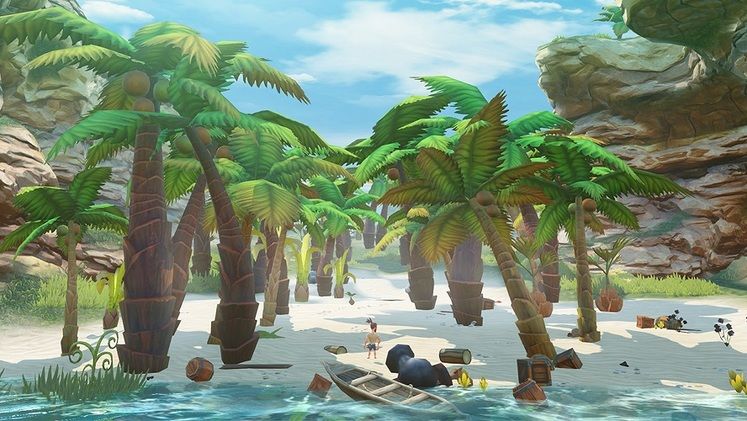 Earlier this year, Korean developer and publisher Odd One Games introduced players to a bright, new RPG in the form of Tree of Life. This idyllic island MMO is a sandbox survival game that takes a step away from the constant aggression and stark tones of many other offerings like it to offer players a chipper and lively world based on building, settlement, and cooperation. Dozens of skills are offered for your mastery and the island is wide with opportunity for exploration and crafting to carve out your own little place in the world. That said, Tree of Life favors a community experience and anyone looking to fly solo might find this island less than inviting.

The entrance into Tree of Life is a Robinson Crusoe-esque affair where the promise of riches takes your character out to sea only to find themselves shipwrecked on a strange and exotic island where it’s on you to learn and survive. Like any sandbox survival game, you start with little more than the clothes on your back to begin your own adventure. Tree of Life is quick to guide you into the basics of control, crafting, and progression. Through a meaningful, yet simple tutorial, Tree of Life very easily teaches players into what they need to get or craft their basic necessities and how their characters will progress to be able to do more within the game’s world. 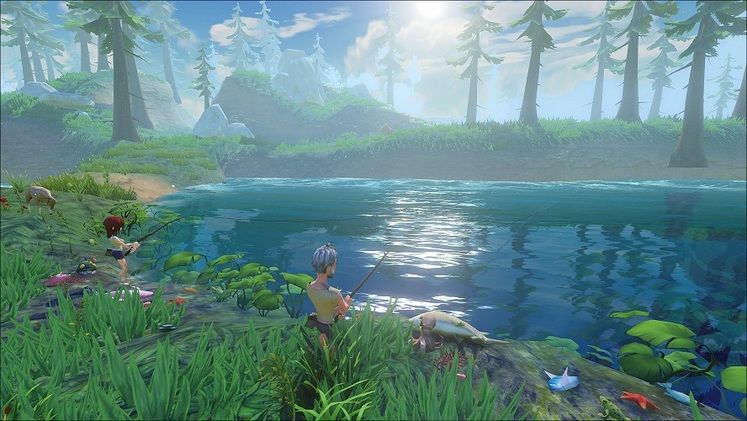 Tree of Life features a skill and level-up system that works very simply by accomplishing tasks related to the skill. Build a campfire or survival tent and you’ll score carpentry levels. Craft an axe and you’ll become a better blacksmith. Use that axe to hunt food, defend yourself from monsters or people, or harvest tree lumber and you’ll become more proficient in axes (not to mention scoring points for logging from that tree). The game includes over 20 skills with 50 levels a piece to master in order to be the best of your trades, so specializing in a handful is where you carve out your place in Tree of Life and truly make your character unique.

Of course, specializing is also a part of how you find your place in the player ecosystem of Tree of Life. A huge part of the game is finding other players or bringing your friends to build a gathering of pals that can do their part and serve the group. You start by choosing one of three factions at the start of the game, which allows you find your way to settlements among your faction. Building settlements is integral to getting the most out of Tree of Life and the larger your settlement is, the more monsters the world will spawn to try and knock down your hard work. Cooperation and acceptance from other players is a bit of a dice throw, but reaching out and finding out who is around and can help is fairly simple. We had a few play segments where normal internet rabble didn’t lend much help, but better experiences where more experienced players answered questions or offered direction also weren’t incredibly hard to find. 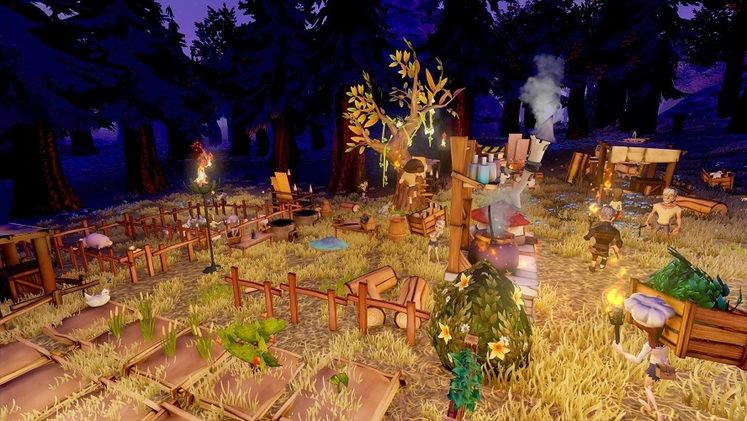 Unfortunately, the presence of less cooperative players and the need for persistent engagement clashes with a few mechanics that you’ll come across in Tree of Life. Most noticeable is that nothing is permanent if you don’t come back to the game frequently outside of your personal group Tree, which acts as the core to your base of operation. Almost everything else, at least in the early goings of the game, is on a fairly short timer from which it will cease to exist if you don’t pop in and pony up some materials to tend to it. It’s good to keep the landscape more clean of the work of players who come in, build, and don’t ever come back.

It can also feel draining to not be able to make it back after a bit only to finally return and see all of your hard work up in smoke outside of your tree, especially when trying to go it alone can be a timely and ultimately taxing process. Level progression means you can take on bigger projects, but it’s still a problem to have to be so attentive, make sure you have buddies on board, or bet on luck of getting a good random group together early on. 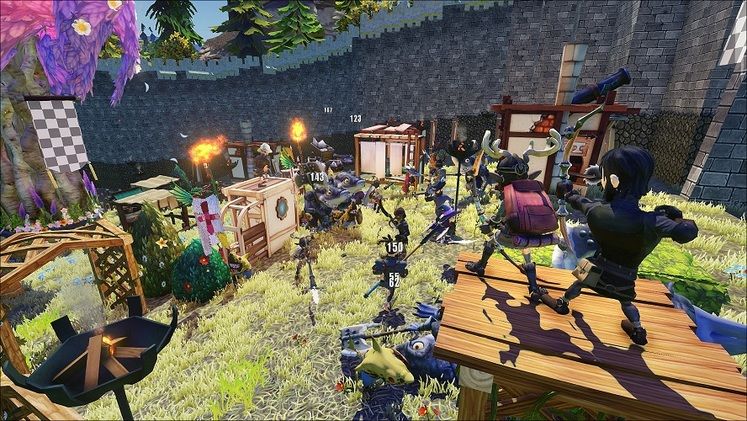 The other problem is that other players can hinder you greatly either by accident or purposefully. None of your goods have locks on them and you won’t get locks until you can craft them at a certain level in the tinkering skill. That means anyone can come in and nab your goods if you’re not prepared to look after your things frequently or haven’t proficiently leveled enough to lock your things down before logging off. Moreover, being sabotaged out in the world is a real possibility too. Players claiming all the livestock, chopping trees down near your settlement without replanting, and other more creative issues of chaos mean it’s a little too easy to cause problems for others, even if you might not mean to do it. 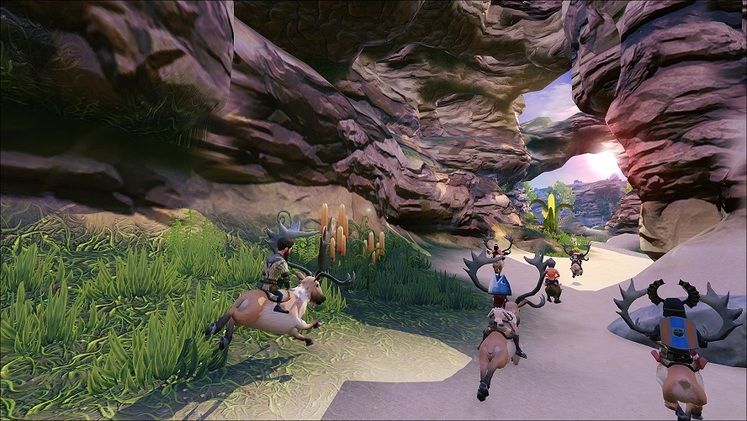 Tree of Life’s landscape is pretty diverse. Though it starts tropical, there are all sorts of environments to explore on the vast island, each with their own unique threats and charm. It isn’t the most graphically intensive or beautiful world we’ve ever seen, even in MMOs. However, it does have a sort of unique cartoonish charm that permeates everywhere you visit and at least sets it apart visually from many others in the sandbox MMO genre. From desert to tundra and everything in between, there’s a lot to see in each area. Moreover, everything runs together rather nicely with very little glitching in the motions. There’s occasionally a texture pop-in when you first log in or teleport over long distances, but otherwise, Tree of Life is a lively game that is lovely enough to look at for long periods of time.

Tree of Life has a lot of charm to it. The progression and leveling is simple and easy to get into and it won’t be incredibly long before you’re able to put a makeshift camp together with relative ease. Moreover, the world is brighter and more cheerful than a lot of MMO experiences we’ve seen and is genuinely enjoyable to explore as far as its diversity goes. Getting together with a community is where the game thrives most and Tree of Life gives you more than enough tools to be a part of building a settlement, defending it, and finding your own role within your little community. Unfortunately, things like building timers and purposeful or accidental sabotage by other players can make various aspects of Tree of Life’s early game a test of endurance and/or dedication, especially if you’re going it alone. That said, if you bring some friends or find a few, Tree of Life is a lush environment that will give back in kind.

Coming together with others to thwart a ravenous pack of zombies intent on knocking down our hard-earned fort for the first time was a thrill. 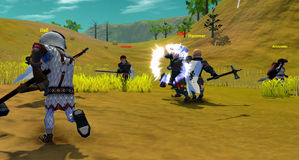