Trine 3: The Artifacts of Power

Trine 3: The Artifacts of Power Review

Trine 3, the latest chapter in Frozenbyte’s fairytale action-platforming series, introduces a fairly major change – rather than side-scrolling your way through its beautifully rendered fantasy backdrops, you can now explore them in full 3D. This presents both some great benefits but also some slight headaches for our returning trio of wandering heroes, Zoya, Pontius and Amadeus.

Trine 3: The Artefacts of Power

Pontius the knight is the brawler who you’ll use to clear out large groups of enemies. He can also bring his shield up to deflect projectiles, and, somewhat inexplicably, use it as a parachute to extend the range of his jump. Zoya the thief can hit targets at range with her bow, swing across chasms with grappling hook arrows, and tie objects together for slightly obtuse puzzle solutions. Amadeus the wizard rounds out the trio, with his telekinetic powers and ability to summon a surprisingly useful magical crate.

It’s the simple interplay between these powers that makes solving Trine’s multitude of puzzles so satisfying. You can switch between the heroes at the tap of a button, slowly probing the environment to discover the right combination of abilities to progress. The ability to go wandering off on the x-axis lends a real sense of depth to Trine 3’s levels, which are far bigger and more ambitious than anything Frozenbyte has attempted before; rather than hopping across the deck of a washed-up shipwreck, Trine 3 has you clambering through its hold, flinging cannons at smashable crates, and simply spending more time enjoying the intricate craftsmanship of the world than you’ve ever been able to before. 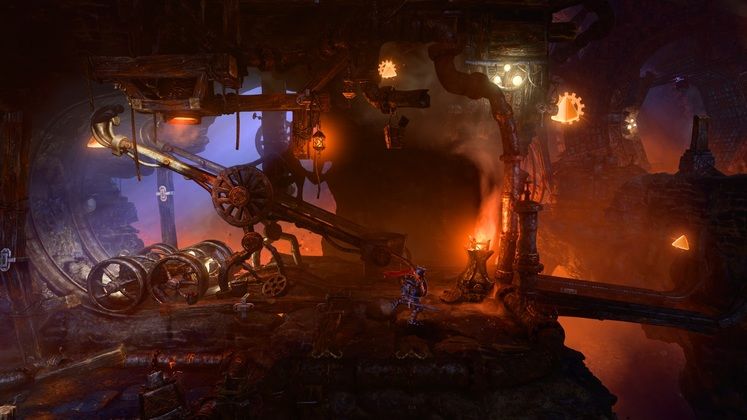 Scampering about the levels snagging Trineangles is as fun as ever

This newfound sense of exploration and depth isn’t all sunshine and roses, however. I’ve always enjoyed Trine’s focus on slightly scrappy, physics-based solutions, but when you’ve got an extra plane of movement to consider, you do get moments of frustration where it’s seemingly impossible to line things up the way you want to. Amadeus the wizard is the biggest offender; utilising his telekinetic power was never an exact science in the previous games, and with the addition of full 3D movement, placing a crate in just the right spot can feel a bit like performing keyhole surgery with boxing gloves on.

Fortunately, Trine’s puzzles rarely offer binary solutions, so most of the physics frustration can be alleviated with a bit of clever fudging. In fact, there’s a distinct pleasure in battering you way past a tricky challenge in a way you’re fairly sure the designers didn’t intend. There are obvious benefits to 3D platforming, too; combat with Pontius is much more punchy and enjoyable, with some really lovely animation work as he barrels and batters his way gracelessly through bands of goblins and golems.

Each level is scattered with ‘Trineangles’, floating pyramids that act as a kind of currency for unlocking new story missions and challenge areas. Crucially, you don’t have to hunt down all of these hidden trinkets to progress – by the third level or so, you’ve got enough stored away to progress the story and try out some of the solo challenge maps. 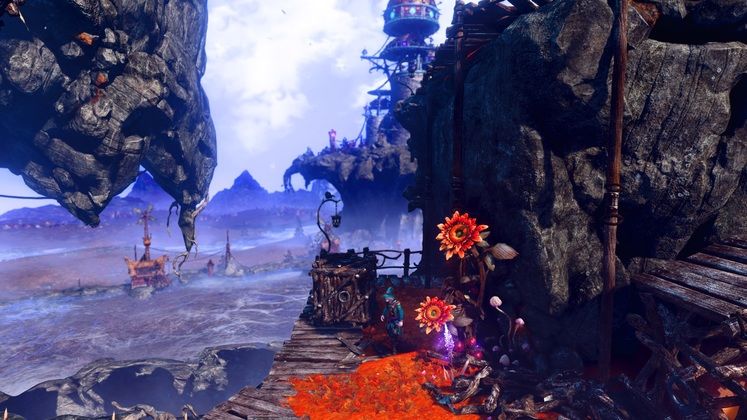 Unfortunately, these aren’t quite as entertaining as the story missions. The restriction of one playable character means that if you die, you have to head right back to the start of the level. While those levels tend to be short, the regularity with which you plummet to a horrible death quickly becomes wearying. The imprecision of the game’s 3D movement becomes actively irritating here, rather than charmingly scrappy.

It’s the story levels that are the main draw, then, and thankfully they’re all of a consistently high quality. The locations the game takes you to are frequently jaw-dropping – a ruin surrounded by waterfalls, rose-coloured at sunset, a wizarding academy filled with bizarre magical trinkets, the pages of a fairytale book. Despite the fact that the story and dialogue never reach beyond generic fantasy nonsense, it was always a treat to see where the game took me next. 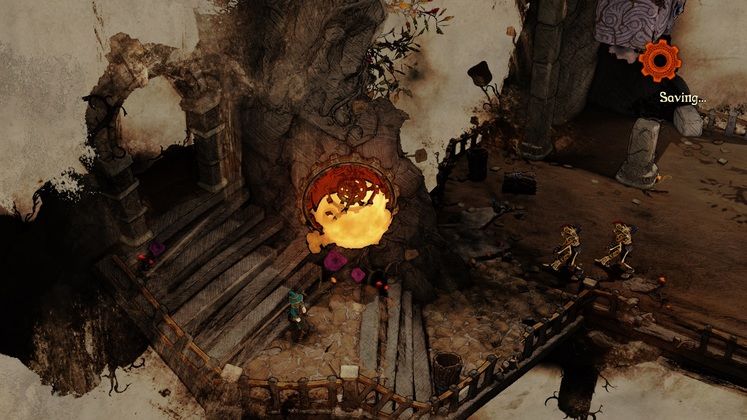 Each visual feast of a new level is its own reward, and there are some really lovely touches – one memorable moment sees you run into a giant turtle fisherman, glumly waiting for a fish to bite, unaware that his rod is tangled up in the foliage. A quick bit of telekinetic sleight of hand, and he retrieves his hard-earned dinner, mumbling happily to himself as he trundles off home through the rain, opening a new path for you to adventure onwards as he does so. This isn’t a long game – it runs around five hours or so – but to me, that brevity feels just right. Trine 3 never outstays its welcome. And if you do find yourself hankering for more content come the end, Frozenbytes is also releasing a level editing tool, which should ensure a steady supply of new content.

TRINE 3: THE ARTIFACTS OF POWER VERDICT

Trine 3 is another very enjoyable entry in a reliably solid series. The addition of full 3D environments, though it can occasionally cause a few issues with perspective, for the most part adds a sense of depth and weight to the series’ trademark beautiful, colourful backdrops. Though they demand the occasional spot of physics engine fudging to progress, puzzles are generally fun and challenging without being frustrating. It may not quite master its new perspective, but Trine 3 is still a charming, light-hearted romp that’s well worth your time.

My encounter with a morose turtle fisherman was particularly memorable. 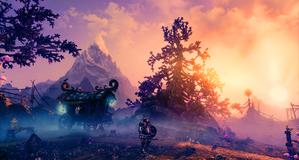