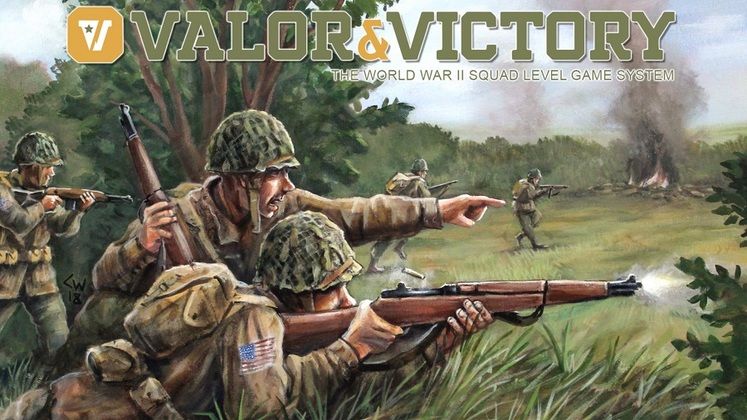 Valor & Victory has one simple goal, to take the small-scale tactical combat of its WW2 tabletop experience and adapt it for computer-based play. In this it achieves success and at first glance, the hex-based map and unit tokens instil an immediate sense of old-school board games.

That isn’t to say the game is all sunshine and roses, and the dedication to this perfect facsimile has downsides for those players who aren’t interested in hit tables and multiple phases.

The game is played in turns, with each side moving through multiple phases allowing for different actions. For me, these phases are where the gameplay begins to slip up. The first phase is about command decisions - splitting units and transferring special weapons. After this, you are given the opportunity to fire at enemy units within your line of sight.

Firing requires you to select one or more units in a stack and then click on an enemy unit with a chance to hit based on several factors. When targeting infantry this is your selection’s Anti Personnel Firepower (APFP) and two D6. Basically, the greater your firepower and the lower your roll the more chance you have of hitting for at least some damage.

There are also additional modifiers added to the dice in the form of enemy cover making it harder to hit, and your stack leader making it easier to. You can see the modifiers before you click on an enemy to attack but with all the different factors available, you probably won’t spend the time to work out the odds before you click.

There are two additional tables, one for armour (when attacking vehicles) and another for close assault (when you move your units onto an occupied hex) and they both do a good job of simulating the specific encounter they are modelling. However, tanks can feel like paper targets, getting one-shotted before they’ve even had the chance to fire. 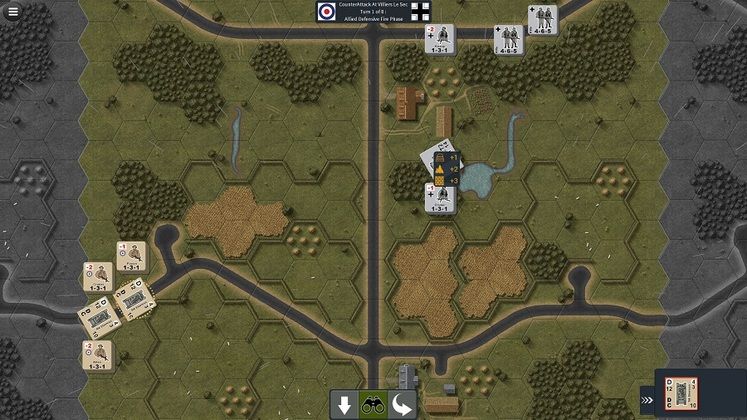 One major issue I had was that the hit rate is fairly low against anything in cover. At some point during my play, I starting tallying up the results of rolls and found that 56.4% of all shots missed with 16.6% of the total dealing only a single point of damage. Bear in mind here that many stacks can have a dozen or more casualty points to begin with, resulting in only 10.1% of rolls landing with a kill - and those only after they had been whittled down first.

This seemed to slow the game to a crawl and I often found multiple turns going by with the same actions being played out each round. This is made even worse by the stacking effects of multiple modifiers leading to some truly tough nuts to crack.

“The game has many intricacies including support weapons for your squads, anti-tank guns, leader units that increase a stack’s chance to hit, transport vehicles, and even tanks that factor in unit facing. There’s definitely a lot of fun to be had if you’re willing to learn the details.”

Movement takes place after the Fire Phase but you can only move units that haven’t previously fired. This means you often have to choose between advancing on your objective or shooting at targets, and when you cross into open ground, the enemy will get multiple shots on you with a higher hit chance before you can even fire back.

There are sometimes smoke grenades available on units to add a defensive modifier but it isn’t always available and when moving into an enemy line of sight you receive opportunity fire (essentially overwatch) which can pin you down and keep you from advancing further that turn - even as moving has already stopped you from firing. 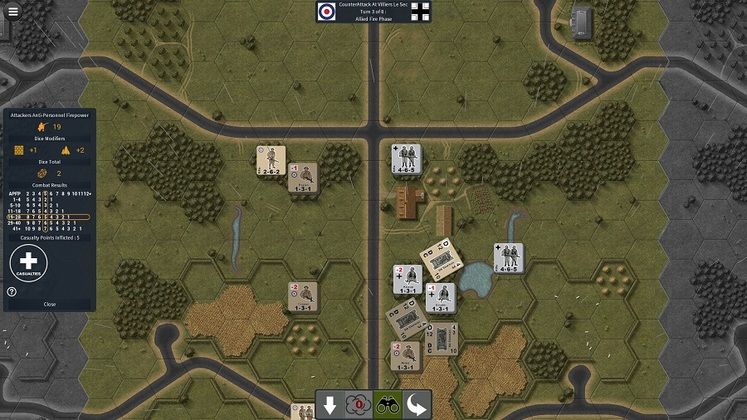 However, when combined with an infantry Assault Move (which reduces the enemy’s chance to hit at the cost of movement points) you can close the distance to the enemy or reach objectives without taking too much damage.

The Movement Phase is then followed by an enemy Defensive Fire phase where any units that haven’t shot yet can do so on your forces and potentially pin them down which affects the next and final phase, Advance and Assault. During this, all units not pinned can move a single hex and engage in hand-to-hand combat by moving into an occupied hex.

So far all I’ve covered are the basics of the gameplay and it would be unfair to judge it only on that. The game has many intricacies including support weapons for your squads, anti-tank guns, leader units that increase a stack’s chance to hit, transport vehicles, and even tanks that factor in unit facing. There’s definitely a lot of fun to be had if you’re willing to learn the details.

Then again, there are parts of the game that make little sense to me. Take one game where I assaulted a tank with infantry carrying no anti-tank or explosive weaponry at all… and won. In that same match, I lost because I failed to take my forces off the field despite wiping out the enemy and having 3 turns left in which to easily reach the exit. Meaning that had I left an enemy unit alive to shoot at my rear I could have won, but sometimes the rules just don’t make sense. 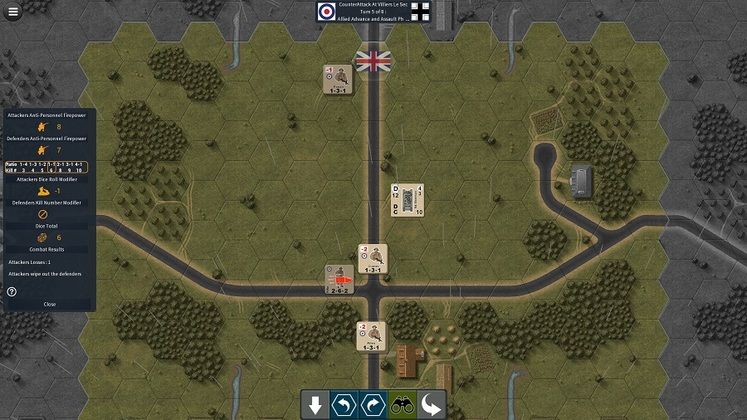 While these issues appear more as logical inconsistencies, there are other design decisions built into the game that affect it negatively. Take the movement we discussed before, where moving sacrifices the ability to shoot while opening you up to both defensive fire in your turn and another round of fire in the enemy turn, all before you can shoot back.

“For those accustomed to PC gaming, the reliance on tabletop hit tables and animated dice rolls can break the immersion.”

Not to mention the near one-to-one conversion of a tabletop game onto a computer. This will likely strike a nice cord for many hardcore fans of that format, especially since getting to play in person has been difficult lately. Though, for those accustomed to PC gaming, the reliance on tabletop hit tables and animated dice rolls can break the immersion.

This conversion also fails to display information in an accessible way, with unit stacks displaying only one of the units on the map until you right-click on it for more. This makes it a little tricky to keep track of the strength of unit stacks, especially with the other UI elements. The tokens can also cover terrain leading to confusion over the protection that tile offers until right-clicked. 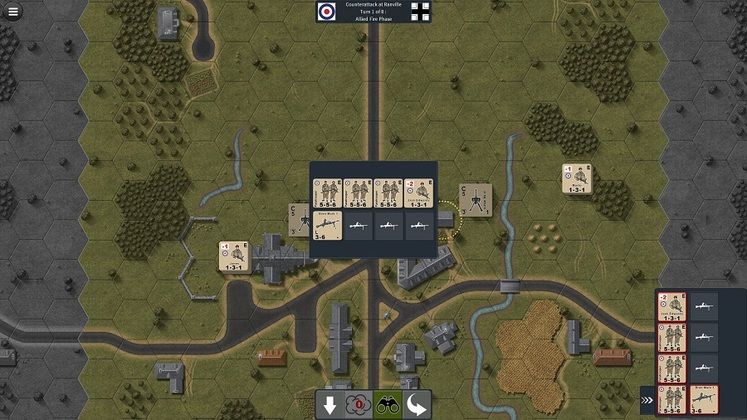 These UI elements come into play as a minor annoyance, with the AI shots whipping by a little too quickly to digest what the result was, especially when firing at any units at the top of the map where the result popup can’t be seen because the camera auto-focuses in the middle. Sometimes even the results panel seems incapable of showing the consequences of a roll before the game moves onto the next action.

This stands in contrast to other aspects such as the buildup to a roll, with quite slow-paced timing on the animations that play out before the roll is even begun. Perhaps it would be better if the roll and attack animation occurred at the same time, but that isn’t the game we’ve got.

Clicking off your unit during movement also ends movement for that stack, meaning you can’t check line of sight mid-move. This might not seem like a huge deal once you recognise the need to check the path you plan to take hex by hex before you start moving, but there is also no reason to have it aside from the pedantic old tabletop ‘your hand left the unit’ rule.

With this said, certain UI elements can be toggled off in the menu but these are cosmetic options only. Even so, once I found out I could turn off the perfectly synchronised birds flying across the map over and over again I was oddly overjoyed.

Valor & Victory is based on the original tabletop board game and for better or worse is meticulously designed for fans of that format. Those familiar with miniature wargaming are sure to find a game capable of scratching that same itch, but if you prefer your WW2 strategy more accessible, Panzer Corps 2 may be more up your aisle.

Watching a little transport truck drive into my line of sight and feeling the tension as the dice rolled and my Sherman blew it off the board. 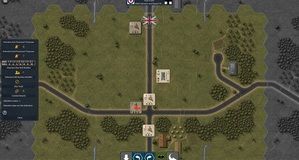