Victoria: Empire Under the Sun

Victoria: Empire Under the Sun Review

Victoria simulates the entire world from 1836 through to December 31st 1920. You can select any nation on earth

Once, Britain was known as the 'Empire on which the sun never sets,' and the world had a number of countries looking for their place under that sun. Great Powers forged empires using new techniques based on science and industry, abandoning the old ways of marital spirt and blood ties. It was a time of hope, expansion, oppression, slavery, industry, advancement and the struggle of peoples to be the greatest on earth and for others, to achive freedom and equality. Now, thanks to Paradox entertainment, players can relive the struggles of the active and turbulent 19th and early 20th century through their latest release, 'Victoria.' 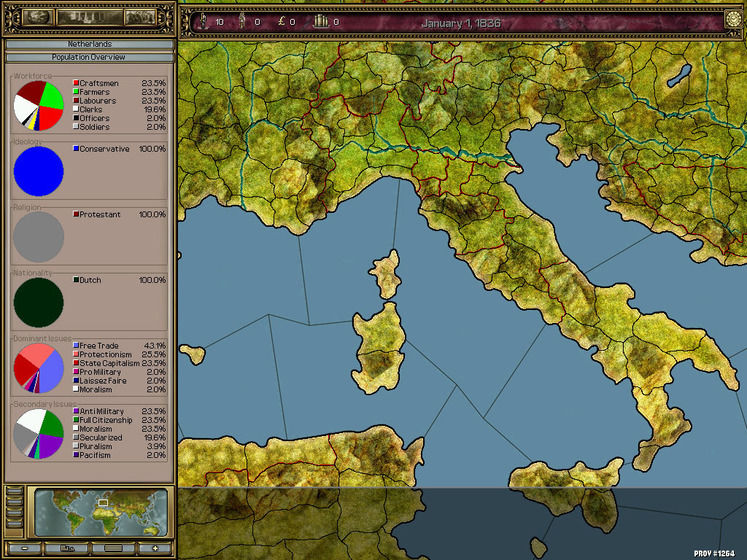 Victoria simulates the entire world from 1836 through to December 31st 1920. You can select any nation on earth, and you can switch in game to others nations, and you will see new nations be born from time to time. The game engine is based on Paradox's Europa Universals and hearts of Iron, so players of those games will see something of the familiar in this offering.

The objective of the game is to be the best of the best, the number one Great Power. The game decides the order of powers based on three factors, Prestige gained through war and research, Industrial power obtained by players diverting funds to industry, and the third criteria is military power, the sheer size of your armed forces and how the function in war. The top eight powers are the Great powers, and gain advantages in diplomacy due to their favored status. Since only numbers matter, powers can slip in and out of the rankings. The rest of the world is made of Independent nations, Satellite countries, and uncivilized nations, and the status of powers will change during the game. Their are also unowned areas that powers can control and eventually turn into colonies by placing one of four building types, a coaling station, mission, trading post or colonial fortress. This is expensive, and your nation must have access to the area, and you have to control all the provinces to claim the colony, or have all four building types in the colony to claim it. Doing it the latter way may bring you into conflict with other powers that are expelled.

How you achive your goals is based on the nation you select and the technology you research. However, everything in Victoria costs money, and money comes from a number of sources. The earliest source is taxation of your population, devided into poor, middle class and wealthy. If you over tax any segment of your population, be prepared for violent revolutions to break out in the form of military units appearing in your provinces! Only your own military can put these revolts down, and only sound fiscal planning and low taxation can prevent them. Another source of income is the natural resources of your nation, every area of the map has one of over fifty commodities to trade, and these raw materials are needed to feed people, as well as to turn out industrial goods. The final, and most profitable source of wealth is goods produced by your factories. Many goods and factories types are un buildable at start, and must be researched, or you must trade for the technology to get them, and to make them work, you must procure a source of raw materials that the factory requires, either through trade or conquest of areas that produce it. You can borrow money to pay for projects, you will be charged interest, but it is imperative that you remain solvent, if you default, you lose large amounts of prestige, but your debts are forgiven. 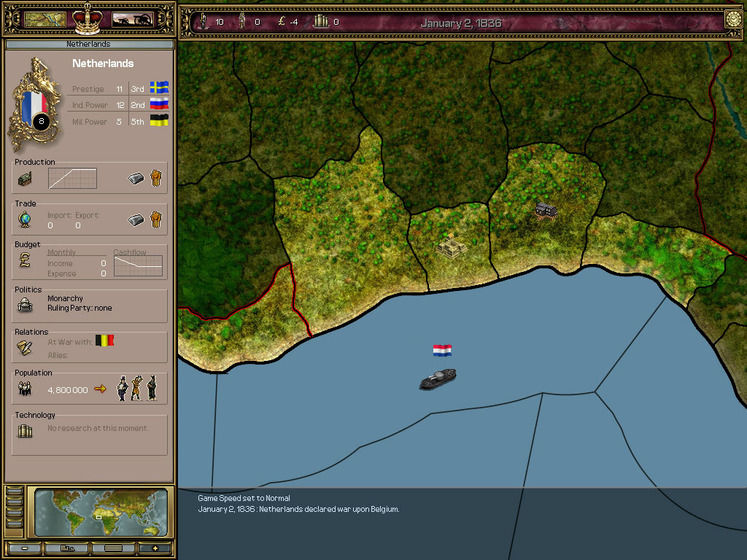 The people who gather your resources and work in factories are called PoPs in the game, and depending on their status, they will provide manpower, revenue, or be a constant source of revolts. They must be kept happy, and you have a number of ways to do this. You can provide 4 levels each of voting rights, pensions, health care, and minimum wage. You can also allow three levels of press, four levels of trade unions, and so on. The higher levels means more freedom for the PoPs, but they will be happier and more productive, but social reforms cost money, so a balance needs to be found. You can only build factories in regions where the PoPs are of the same nationality as your home country, but ingame research, and smart decisions can increase the chances of this, and it makes and interesting ingame, as even religion and clergy play a part. Their is a lot of minutia in this game, you can set the AI to handle a lot of it, but you can often get factories up and running faster if you handle the training of your PoPs yourself, as only craftsmen and clerks can work in factories, and they can only be converted from laborers if you have the right resources on hand.

Your level of research speed is determined by how much money you put into it, and as the game increases, your PoPs become more literate, and research speed increases. If you trade for tech, your research will halt until you generate the number of research points shown to be negative from the trade, so be careful with trading for tech.

You must also pend on crime fighting, ignoring this or setting it low will cause heavy corruption and lost revenues, and cause unhappy PoPs to revolt. Your government and reforms can influence the costs here. The game will describe the criminal activity (if any) in any province you own if you look for it. 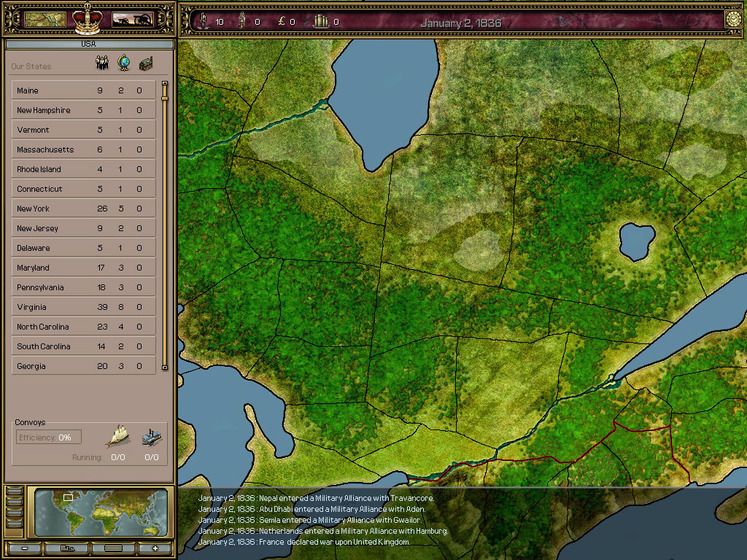 The military side of things in the next area that costs you money, because you not only must pay to raise new units, but you also must pay upkeep on the units you already have. Military forces on land come in three types only, Infantry, Cavalry, and Dragoons. You can attach different types of brigades to these formations only when you first raise them, and you must have the right techs for certain types of brigades, which include artillery, guards, Headquarters, eventually tanks for infantry, two types for cavalry and a number of types for dragoons. The various unit types have such varied factors as moral, shock value, defense, and all can be modified by tech. The ships as first are wooden, but iron and eventually steel type ships can be researched. Every unit needs a transport to move over the sea, and it is possible to isolate colonies and countries and carry out blockades if you have navies. Depending on the number of divisions you have in a province, it changes to your color in war when occupied (the more divisions, the faster the conversion). If you leave captured areas un garrisoned during war, partisans may form to steal them back. How many areas you can take from a beaten nation depends on how well you did in battle, how many areas you took, and the type of nation your fighting, you can outright annex uncivilized nations, others must be sparred. The negotiations can be quite detailed and include no gain, some gains, or if you lost, you lose territory. Leaders are also available, and they modify land and sea units, and are generated when you have 20 leader points. The points can come from events, training or other sources depending on your government.

You can improve your nation over time, as you research, there are five levels of railroads to build in each province. This is again where the minutia factor comes in, you have to click on each area, and have the needed money and resources to improve the rails, but they bring a lot more money, so by all means, build them where you can. You can also build fortifications, and once a factory is built, if you spend money and resources, you can expand the factory. This increases the output of goods, without increasing the amount of raw materials needed, so it another major money maker, to say nothing of the number of victory points this generates. 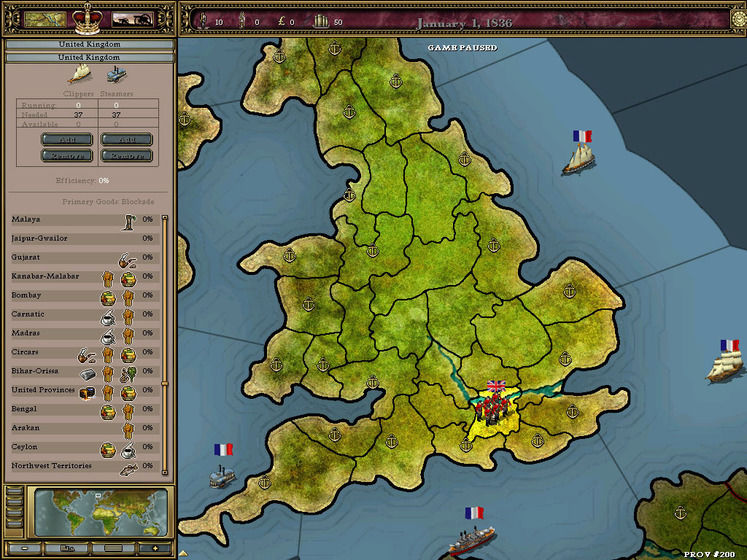 Overall, this is an excellent effort from this company. However, that doesn't mean there aern't nits to be picked. Like all Paradox games, it will crash at times, and there are some historical problems. China for example, always becomes very powerful, due to the game's mechanics, when historically, it should be a helpless victim even against marginal powers like Russia. Also, Prussia seems to have outright won or finished second in all seven test campaign games I played. Since Paradox is famous for putting out patches to it's products, hopefully, they will address and correct these flaws in the future. This game is a solid effort, and I highly recommend it for people whom enjoy empire building in the great age of colonialism.

VICTORIA: EMPIRE UNDER THE SUN VERDICT

Click on the picture to enlarge it Overall, this is an excellent effort from this company. However, that doesn’t mean there aern’t nits to be picked. Like all Paradox games, it will crash at times, and there are some historical problems. China for example, always becomes very powerful, due to the game’s mechanics, when historically, it should be a helpless victim even against marginal powers like Russia. Also, Prussia seems to have outright won or finished second in all seven test campaign games I played. Since Paradox is famous for putting out patches to it’s products, hopefully, they will address and correct these flaws in the future. This game is a solid effort, and I highly recommend it for people whom enjoy empire building in the great age of colonialism.

Victoria: Empire Under the Sun Essentials 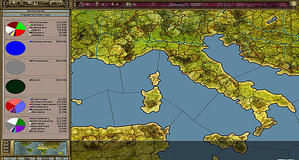