Pterodon and Illusion Soft words decided to bring about a more authentic jungle style of warfare in Vietcong, where players had real, authentic warfare to deal with

War shooting games have always been a popular type with gamers everywhere, and after supplying consumers with loads of World War 2 games, developers began switching things up and coming out with games based on the Vietnam War, but results were not what they had hoped.  Pterodon and Illusion Soft words decided to bring about a more authentic jungle style of warfare in Vietcong, where players had real, authentic warfare to deal with.  Ambushes are non-stop, the enemy is not always visible, and death is everywhere.  Sounds good, but there are some drawbacks.  There were some performance problems arise with the final product, and the visuals were just not all that.  Now Pterodon is trying again with a sequel, Vietcong 2.  This Vietnam War game takes place in 1968, during the memorable Tet Offensive.


The graphics and visuals have not come very far since the original Vietcong.  In fact, much of the game has not changed very much since then either.  Textures are not what they should be, the engine just might be the same one used back then, there isn’t much interactivity, and it just doesn’t run very well.

As a player, the damage that will be done to your character (an American soldier) is brutal, unforgiving, and nearly unable to be healed.  The crazy and kind of unrealistic thing here is that you can get killed by a very small and low powered weapon, and if you aren’t killed, you lack the ability to heal yourself.  Shots will come at you through different objects, a door for example, and you won’t even be able to see the enemy.  This becomes overly frustrating throughout the game, especially when you can’t heal from the wounds an unseen enemy inflicts.  On the other hand, it will defiantly make players be fully aware of their surroundings at all times and stay on their toes.  It’s the same as war if you really think about it.  When the shooting is turned around on your enemy, it makes the death and hurt aspect a tiny bit better; they can be taken out in just a few rounds.

When it comes to the other members of your platoon, they will focus all of their fire to certain points you have designated and move towards places you have flagged.  It would have been great to give commands to individual soldiers, but maybe that will come in a later game.  Here, your troop must move as a group and you can’t tell certain soldiers to follow or stay back.  The great thing about your troops: you’ll always have at least one soldier who can supply you with ammo for any weapon you have in your arsenal, and another, presumably the medic, who can heal you.


The artificial intelligence of your team is not up to par when fighting indoors, especially if there is more than one invasion.  I know what you’re thinking: “Aren’t wars fought outside?  Who cares what they’re like inside?”  While that may be true in a real way, in Vietcong 2 you will have to make your way through a building at the end of each level in order to advance.  You can sort of cover up for their inadequacies because you are the only soldier in the game that can use grenades, so they can just hand out until you reek havoc with your grenades.  Enemy AI is pretty smart, the only thing they really do wrong is not ducking low enough behind cover.  While that doesn’t sound like a huge thing, in a war it can be the difference between life and death.  Your main enemy will end up being the overall performance of the game and how quickly it will let you kill or be killed anyway.

The arsenal available to you is quite varied and you have plenty of choices.  You are able to fight with weapons you find, like the weapons of dead soldiers.  Your ammo guy will even have ammo for enemy weapons.  The AK-47 is probably the best assault rifle you will use, and it will get the job done.  Even though they are available, the only things you’ll have room for is what you can carry, which extends to a knife, a couple rifles, some grenades, and a health pack.

The biggest and most evident problem in Vietcong 2 is probably when the scripting breaks.  The whole game just has a sort of rough feeling to it.  For instance, you will be being led by an escort who may just stop for twenty or thirty seconds in the middle of what he’s doing, while you stand around hoping you don’t get ambushed.  Sometimes you may take an alternative route and the enemy won’t even show.  You’ll have to double back and go the intended way right back to where you were the first time, which is now full of enemy soldiers.  This kind of levels down the excitement of the game.

While I may have made Vietcong 2 sound like a bad game, it really isn’t.  The developer’s idea was in the right place, and the gameplay isn’t all that horrible.  It’s just a little rough and could use some tweaking in some areas.  There are some strange performance issues here and there, some scripting problems, and just isn’t that great to look at.  With the occasional sluggishness and slow playing of the game and the inability to heal, Vietcong 2 can be really frustrating and annoying to play at times.  If you are a gamer who likes and appreciates a good war shooter game, this would be an ok purchase, but there are definitely better ones out there.

One of the best things, and possibly your only hope of staying alive, is taking on a whole group of enemy soldiers in a building when your team members can’t really do anything to help.  Just pop one grenade after another and watch them drop like flies. 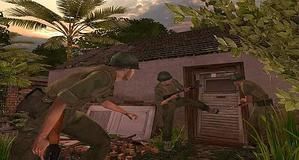