The joys of pest control in the Warhammer universe

First-person melee combat is notoriously difficult to get right. Most games never get close to creating a tangible sense of weight to weapon swings, blocks and parries, and therefore you end up with something like Skyrim, where it feels like you’re battering away at enemies with a rolled-up newspaper. The most important thing, then, for a game about slaughtering hundreds of slavering rat-men, is that it feels good to wave a sword about. Vermintide passes this test with flying colours, and backs its excellent combat system up with some neat character progression elements and lashings of Gothic fantasy.

It is, as the game’s rather unwieldy full title suggests, rapidly approaching the end times for Warhammer Fantasy’s beleaguered, grubby yet defiant human Empire, as just about every horrible creature in the world slithers its way up to the surface to destroy and consume. In the case of Vermintide’s atmospherically designed city of Ubersreik, it’s the murderous, swarming rat-men known as the Skaven who come out to play. As the city burns, five heroes representing each of the core ‘goodly’ races (though this is Warhammer, so any concept of goodness is fairly relative) band together to slaughter the enemy and save what’s left of Ubersreik.

This is actually one of Vermintide’s major strengths; in Left 4 Dead, the obvious inspiration, each hero character was ultimately indistinguishable from the next. Ambient dialogue helped to flesh out the team a little, but really there was no reason to pick one hero over another. In Vermintide, each hero plays drastically differently, and that helps to both root the player in the world, and offer a great deal of replayability. Saltzpyre the Witch Hunter is a gangly, cadaverous figure who excels at range thanks to his array of pistols and repeaters, while cheerful dwarf Bardin is a pint-sized ball of destruction, who can also take a hell of a beating if you give him a shield and axe combo. Sienna the Bright Wizard is my favourite, partly because she looks awesome with her black-iron collar armour and flame motif robes, but also because she can fling fireballs around at will – at least until she begins to self-immolate under the stress of all that power, and you have to vent her like a busted kettle. 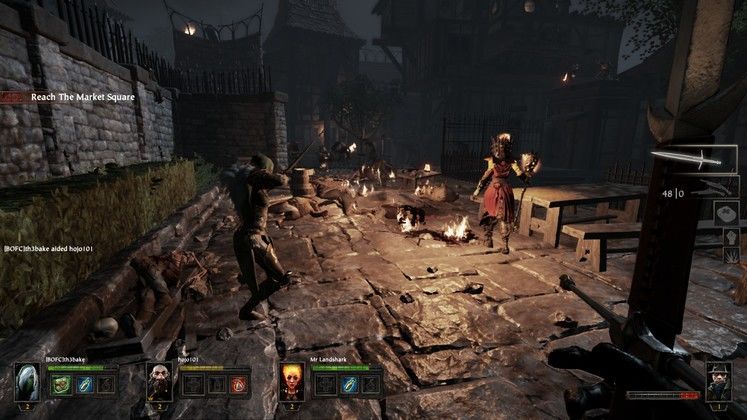 The grimy, gory world of Warhammer Fantasy is lovingly recreated, and though the city maps can become a little over-familiar, there's plenty of cool things to see

Once you’ve identified your favourite, there’s plenty more to think about. Each character has a stock of different weapons, from simple swords and axes to mighty zweihanders and repeating pistols that can fire off eight shots at once. Most importantly, these don’t simply feel like extra skins or slightly reworked animations – the weapon you choose makes a huge difference to how you play. Developer Fatshark has done a great job of carrying over the lessons it learnt from its historical brawlers War of the Vikings and War of the Roses, and the combat model in Vermintide is the best they’ve ever come up with. Rapiers offer an armour-piercing thrust attack that you can use to dispatch elite armoured Skaven, while two-handed hammers and axes sweep away huge swathes of foot-soldiers.

The moment-to-moment brawling is incredibly satisfying. Skaven heads and limbs go flying as you batter away, and there’s some actual depth to be found in the careful deployment of blocks, timed power attacks and use of ranged weaponry. You feel like you’re actually making split-second tactical choices in the middle of battle, rather than blindly hacking away – on the harder difficulty levels, smart timing of shield blocks and power attacks is essential. Admittedly guns and bows fair slightly less well than melee thanks to some occasionally loose hit detection and reduced power, but they’re really there as a situational accompaniment to the main feature, namely neatly side-stepping an enemy, then cutting him in half with a broadsword. Which is equally as satisfying the thousandth time you do it as the first. 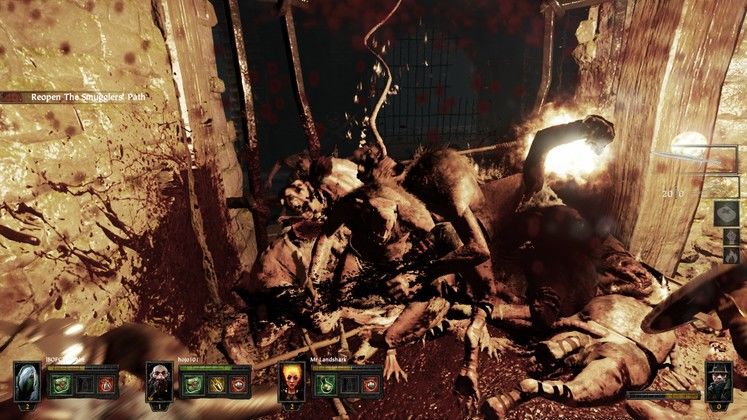 Life expectancy for a Skaven footsoldier - two to three hours

Not that the Skaven are just there to take things lying down. Though your average rat-men footsoldiers for the most part take the role of unthinking zombies – charging in as a horde to get filleted on the end of a blade – there are are several special enemy types with a knack of appearing at the least opportune moment. Packmasters garotte one player and drag him into the shadows, while Gutter Runners are ninja rats who can pounce, pin, stab and disappear in a cloud of smoke. Then you’ve got Gunners, who perforate the nearest player with a minigun, and Globadiers, who hurl corrosive gas bombs that obscure and do damage over time. Let’s not even speak of the Rat Ogre, a hulking freak that can hurl you around like a rag doll.

All of those aforementioned elite enemies are roughly analogous to the ones found in Left 4 Dead, and Vermintide doesn’t really alter the flow of gameplay that Valve’s co-op hit established way back in 2008. You’ll enter a level, hack your way through hordes of enemies as the AI director randomly throws encounters at you, and occasionally complete a side objective such as securing bags of grain or barrels of explosives. Fatshark’s innovation isn’t in the structure of the game itself, but in the worryingly addictive melee combat and supporting progression systems. 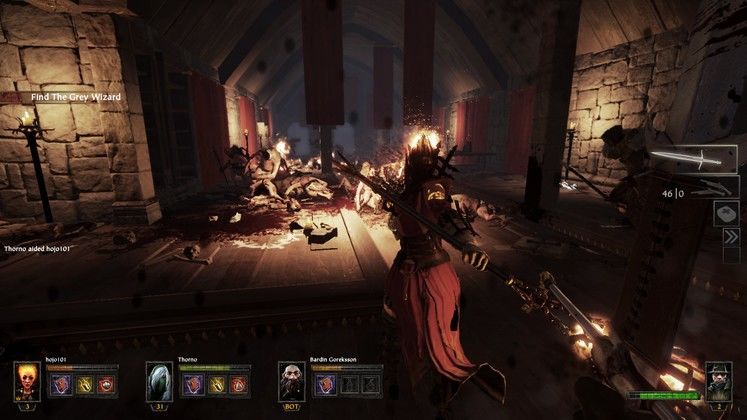 Completing each map will earn you a certain number of Loot Dice, which are then rolled for a random weapon – the more dice you have, and you can earn more by finding hidden Tomes within each level, the better the chance you have for a rare weapon with a special bonus. Weapon loot isn’t tied to the character you’re playing, and it’s also not powerful enough that it makes grinding essential – even the best weapons will only have a few extra abilities, so players who start with a simple, no-frills hand axe won’t be left at the back while the player with the Legendary flaming zweihander murders dozens of Skaven with every swing. It’s enough to encourage the insatiable loot goblin that lives in the back of every player’s mind, without unbalancing the game itself.

All of this makes Vermintide a very easy game to lose dozens of hours to, and also makes it far easier to forgive the game’s occasionally rough presentation. While Ubersreik is for the most part a fantastically moody place to explore, sometimes the lighting can look a little flat, and the succession of gloomy backstreets a little over-familiar. The cluttered, maze-like nature of the city maps can also make for some amusingly buggy encounters; Rat Ogres are particularly vulnerable to getting stuck on the environments, and odd ragdoll and clipping issues are common. Thankfully, Fatshark’s done a good job of slotting in some more varied locations alongside the gloomy night-time Gothic, including some welcome excursions outside Ubersreik during the day.

Vermintide is fast, furious fun, and its supporting systems do a great job of dragging you back in for just one more go. The melee combat is the most rewarding and enjoyable I’ve ever seen in a first-person game, and the distinct hero characters and post-game loot system give it plenty of extra depth and variety. Jump into an online game and you’ll have a great time, but with one or two friends at your side, Vermintide is a serious contender for the best multiplayer experience of the year. This one’s going to stick around for a good, long while.

Once you get your hands on the Wizard’s flaming broadsword, it’s hard to look at any other video game weapon in the same way.