A new direction for Tycoon games, or a watered down take on the formula?

Water Park Tycoon is a game borne of the Theme Park lineage. Bullfrog's classic roller-coaster 'em up, which inspired the Rollercoaster Tycoon series that developed a relatively simple premise into a complex and engaging management sim, allowing players to develop the Amusement Park of their dreams. With sprawling roller-coasters and a serious management aspect to the game the Rollercoaster Tycoon series was a combination of wish-fulfilment and surprisingly complex simulation.

Water Park Tycoon in some ways heralds back to the origins of the sub-genre, not because it pays homage to Theme Park, or because it purposefully tries to recapture the more simplistic charm. No, Water Park Tycoon simply chucks out any improvements or refinements to the formula, leaving us with a very basic management game that fails to live up to the 'Tycoon' part of the name. If you go into this expecting a title that can live up to Rollercoaster or Railroad Tycoon in terms of complexity and intelligent design, you'll be sorely disappointed.


The best way to play Water Park Tycoon is not to play it. By which I mean, you can set up a basic functioning park, with a couple of swimming pools, sparsely populated with the expensive features including slides and fountains. Add a couple of fast food vendors, a few playground attractions and basic amenities, hire a couple of employees, then bugger off for a few hours. Your park can essentially manage itself, and you don't have to deal with the glacially slow pace of the game, that requires you to either take out a gigantic loan to quickly extend the scope of your creation, or wait until the steady trickle of customers amounts to a flood and you can finally start making some money.

Attempting to actually sit in front of the game and 'play' it amounts to waiting until you earn enough money to extremely gradually improve things, whether that's chucking in a tree or two every month, or raising your employees wages as they steadily gain 'experience'. It's never really evident whether something like employee experience means they get better at doing their job, or just means they get pissed if you don't increase their wages. In actuality, it's difficult to care, the choice becomes either a. raise their wages, or b. fire and replace them – and that gets to the heart of the problem with Water Park Tycoon – choice or lack thereof.


Water Park Tycoon offers such a basic simulation of the complex task of water park management that everything essentially runs itself. You can check on your ever fickle customer's needs, to give you an idea of what you need to focus on next, but even this is a little wonky. For instance I once discovered two customers sat right next to each other in a slab of lawn I'd placed near a pool - one had a smiley happy face perched above his head, the other a sad frowny one. Captain Happypants was apparently delighted with the state of my bins, so clean and free of trash thanks to my ever vigilant force of gardeners (weirdly cleaning bins falls to gardeners, while cleaners are mostly shower and toilet scrubbers). Meanwhile not two metres away, Frowny McFrownface was furious at the unkempt state of my waste receptacles... uhm, okay then.

Attempting to frame the creation of your wonder park is a basic mission mode that allows you to unlock additional items for the free-form mode, giving you objectives designed to ease you in to park creation. Upon completion of these objectives, instead of moving on to a new set, you're instead invited to start over again building a new park in an identical lot, only with an ever more distant set of goals to complete. Your park develops from a simple one star basic attraction (according to some unknown criteria) and as it earns more stars you're given more tools to play with. At first you're limited to basic slides and a couple of water features. Access to more complex and even self-designed water slides takes a few hours to earn and quite frankly, isn't worth the wait.


You can imagine my delight upon having left the game running alt-tabbed for an hour or two to discover that my park (without any input from myself other than to shove a couple of trees in every so often) had earned a 3 star rating. Finally! I thought, I can design a giant slide! Designing a water slide unfortunately is not quite as thrilling as designing a complex roller coaster. Left curve, right curve, the steepness of an incline and whether it's a tube or open topped is the extent of your input. The fact that there are only five types of slides and around 10 kinds of pool objects means that after your park extends to a certain size, you're simply left to repeat yourself, shoving trees and pools into an ever expanding space, allowing ample room for money-making food stalls and basic amenities.

Water Park Tycoon is a slow paced, dull and simplistic sim. The music grates before it’s even begun to endlessly repeat the miniscule selection of tracks on offer and that lack of variety becomes a running theme for the game. Unfortunately Water Park Tycoon is about as deep as a toddler’s swimming pool and within a few laboured hours of starting you’ll have seen virtually everything it has to offer. If the idea of building a Water Park appeals to you, you’re better off sticking with the Soaked expansion for Rollercoaster Tycoon 3, there’s very little here to justify a purchase.

Coming back to the game after leaving it idle for several hours, giving you the opportunity to spend a bunch of money in one go. 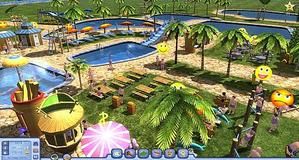