Sailing across the sky, asking why (is this not quite as awesome as it sounds)?

Windforge is a game about sailing through the sky in a home-made airship that you craft, modify, design, build and repair as you battle sky-pirates and seek out ancient artefacts. Set in a Steampunk world where everyone lives amongst the clouds, Windforge combines the destructibility, 2D perspective and mining mechanics of games like Starbound and Terraria with its unique premise. That should be a recipe for success - the concept is brilliant and early signs are good that a world of depth and exploration is about to open up before you.

In short, if I were reviewing a game design document rather than an actual game, I'd be giving it a much higher score than the one Windforge is about to receive. Unfortunately Windforge is a game beset by problems that slowly chip away at the enthusiasm earned by its obvious promise, it's a dreadful shame because there is real ambition on display here.


Windfall is set in a world where Whale Oil is the primary resource used to operate industry and keep the ubiquitous airships from falling out of the sky. Your character is working for an underground organisation, tasked with uncovering the advanced technology of a race known as the 'Aetherkin', defying the laws of society in the process. Although Windforge gives you the freedom to explore and fight on your own terms, there is a central storyline driving things forward, with quests sending you off to the far corners of the sky in search of the means to utilise a renewable energy source to replace the rather less renewable Whale Oil.

The game begins by having you select the class, hair colour and gender of your on-screen avatar before throwing you knee deep into a story-led tutorial that sees you rescuing a translation tablet from a crumbling temple. It's a decent enough introduction that sees you coming to terms with the platforming and fighting elements of the game as well as operation of the jack-hammer that replaces the starting pickaxe of similar titles. Before long the tutorial takes you to your airship and requests that you mine the materials required to repair it. This is where the first warning signs begin to flash. While both Terraria and Starbound revel in the simplicity of 2D pixel art, the most basic elements such as mining and building are remarkably precise and refined enterprises. Here, not so.

Mining in Windforge is the first task that demonstrates that all's not well, it's never entirely obvious where you are mining, and a task as simple of grabbing a few chunks of ore quickly becomes arduous. The inherent fiddliness on display here sadly extends to building and navigation of the world as well as flying your ship. While moving your ship is as simple as using the WASD keys, a lone vine hanging down from a sky island can completely halt your progress. Navigation troubles can occasionally lead to hilarious moments as you smash your ship into a town, wrecking both in the process. Sadly the AI does not really react to this (most NPCs are quite happy to ignore a bullet in the face too).


My post-tutorial adventures in Windforge were at first thrilling; coming across a tiny aggressive ship manned by sky pirates, I leapt from my own ship to theirs, using my grappling hook to catch on to the balloon keeping it afloat, before climbing aboard and dispatching the two pirates that manned it with my hunting rifle. Now I had choices - do I capture the tiny vessel and take it to town to add to my fleet, or strip it for parts with my removal tool, adding further engines and turbines to my own ship?

Windforge has moments where the concepts threaten to cohere into a satisfying whole, yet its severely hamstrung with fiddly menus, and worse controls. An act as simple as moving through a town becomes a chore, overladen with pedantic platforming and odd design that seems to have been thrown together by an army of sadistic architects. The first quest tasks you with finding someone within a town to turn in an item - typical RPG-fare that quickly becomes frustrating with the lack of direction or finesse in moving your character from point A to point B.

Later quests that see you exploring temples for further artefacts too are rendered into frustrating exercises, you're constantly fighting against a game that doesn't seem to want you to play it, from movement to ship navigation, down to the act of destroying terrain – nothing is as smooth as it should be. Combat is relatively simple, using ranged and melee weapons to take down well imagined sky creatures and bandits, yet again the paucity of the AI prevents this from being as fun as it should be.


Windforge is almost an oddity in an age of PC gaming where 'early access' seems to be the way to release an unfinished game into the wild, allowing creators the time and resources they need to offer a polished complete experience. What we have here is a game that would clearly benefit from extra time – and the advice and input of beta testers could have allowed it to become something more than worthy of its peers.

Instead, we’re left with a game that promises so much, but falters repeatedly in its delivery. The 2D platformer with Minecraft elements and bits of the RPG genre (someone really needs to come up with a snappy name for this) is expanding in exciting directions and Windforge deserves to be a part of that. Yet the novelty of airships and battles with giant sky-whales are simply not enough to save it from its flaws, painful as they are. Perhaps post-release support will allow Windforge to transform into the game I hoped it would be, but for now it sits as a flawed gem. It veers between a showcase for ambitious design and an exercise in endurance as you grapple with the controls and wince at the obvious problems, willing the game to live up to its fantastic premise. But it never quite does.

Meeting a sky-whale for the first time, then discovering what happens when you make it angry (hint: you won’t like it when it’s angry). 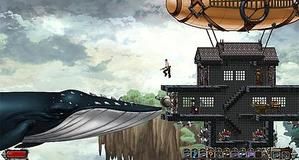