World of Warcraft: Mists of Pandaria

Let's be totally honest: you clicked on this review desiring to find me hunched over Blizzard's corpse, stabbing repeatedly, whilst cackling the cackle of a madman. You'd be happy to think of me as a maniacal bounty hunter, blood on my knife, and World of Warcraft's head sagging on my belt. Go on, admit it, you wanted that didn't you.

Popularity is a strange thing. At first people will offer you adoration, respect, and bits of cake. As time wears on, that love, respect, and cake starts to retreat. If you last long enough in the limelight, it's only a matter of time before someone starts a vicious sexual rumour and questions your relationship with small animals. Just look at H from Steps, the poor bastard.

Now almost a decade old, World of Warcraft is still infinitely popular - and much to the chagrin of some. To those few, Mists of Pandaria is supposed to be the expansion that ends it all. The conservatory extension to Azeroth that finally makes it look like an eccentric's torture fortress. Problem is: it doesn't.

Blizzard's groundbreaking MMORPG is still as addictive as ever. This latest addition shifts the level cap from 85 to 90, adds the Pandaren race, and also the new character-class, monk. The quest system is improved, the graphics refreshed, and the entire ensemble is ultimately renewed.

And yet while this is far from the kiss of death many have predicted, naysayers of World of Warcraft are right in some respects. It would be puerile pointing out that a drop to 9 million subscribers is somehow a harbinger of doom, but this expansion does mark the point where Azeroth became flabby and unattractive to newcomers.

With 90 levels and four massive sections of content to wade through, starting anew feels, well, cold. That old experience of WoW has disappeared. Plucky newbies are now taught to race to the top, rather than saviour the adventure. It feels almost like WoW has lost a lot of its ability to, and pardon the pun, wow.

Although ironically, MoP is Blizzard's most accomplished expansion yet. This add-on feels like a culmination of knowledge. A decade of patching, fixing, and poking new content into the cage has pooled into a design lesson - this add-on is its timely beneficiary.

Blizzard have finally nailed down their own MMORPG experience. Starting out as a black-eyed bear on the Wandering Isle unravels an environment of wonder. Quests are better scripted, objectives less monotonous, and the visuals are set to stun. Shuffling your paws about the place will, for a few fleeting seconds, make you consider dropping everything and recommit yourself to WoW once again.

I could quit my job. I could play 12 hours a day. I could decline reality for this visual nirvana - all of the floating thoughts of the relapsed addict.

The latest additions inject spark and variety back into the adventure. Played as either a tank, damage, or healer, being a monk is the variety performance of roles. This newcomer to the roster acts as an intermediate to everyone that can't pick a definitive role. Taking on either the Brewmaster (tank), Mistweaver (healer), or Windwalker (damage) you will shuffle around clad in light armour, unleashing the power of Chi, and slotting into any pick-up-group willing enough to take you.

Couple this with the new, and albeit controversial, talent system, and WoW feels distinctly rejuvenated. Triggering certain skills will build action points, further allowing you to do more advanced abilities. So while it may look and feel like the same old game, it has learned new tricks in the interim of expansions.

And then there is the usual claptrap of end-game content: raids, instances, player versus player, and everything else that goes along with it. The new isle, Pandaria, is a themepark for those wanting to squeeze a few more morsels of excursion out of the MMO. New dungeons add a certain oriental spice to proceedings, and new "challenge" modes introduce time-trial adventures for those that don't enjoy sole-PvPing.

There's also more proverbial carrot on a stick to chase. Along with the pursuit of inventory, pet battles have been thrown into the mix; the once vanity items now given purpose. Employing a Pokémon style system, players can challenge each other to duels triggering turn-based combat. Add to this a "gotta catch 'em all" sensibility and you have even more hours thrown onto the heap of addiction.

But ultimately, everything written here is redundant. I doubt that any amount of words or reviews will swing inactive, or even new players towards WoW. Veterans know exactly what to expect from MoP, and whether or not you fancy heading back in to Blizzard's virtual world. There is nothing here that in some shape or form you haven't already experienced. It's more of the same, with a few notable improvements: quest, grind, collect, ad infinitum. And for newbies? Well if you haven't picked it up for the past 8 years, why start now with 4 expansions to catch up on?

While MoP is undoubtedly a solid product, it's not Cataclysm. Blizzard's last expansion was a far more intelligent add-on than most gave it credit for. Rather than expanding the experience vertically once again, it set WoW back on itself. Redesigning the world, putting events in transit so that it felt like reality. It was an innovative and simple idea. Players weren't encouraged to just head straight to the level cap, but instead reroll, and enjoy the experience anew.

This time around, it's more standard fare. From the minute you touch furred feet on Pandaria it's a sprint to the finish. Like a plague of particularly famished locusts, it's all about rushing to 90, experienced with tunnel vision. It's a product made for those at the top, and being an MMORPG at such an age, it seems inevitable that is where the focus shifts towards.

So is Mists of Pandaria good, bad, or indifferent? As a loyal subscriber of World of Warcraft it's a fantastic expansion, unravelling more content, and a few more things to do. But as a newcomer or disinterested once-player? There's nothing here to get you excited. If you have lapsed, you won't find anymore adventure; if you've never been interested in heading towards Azeroth, there's nothing here to pop that disinterest and send you sprinting towards the shops to pick up a Battle Chest.

Four expansions in, it finally feels like World of Warcraft is slowing down. Unless you’re currently sitting at 85, even pandas aren’t going to bring you back into this one.

Small tweaks and improvements brought about from a decade of experience. 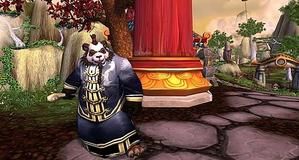