Good ol’ Kiryu Kazuma, the famed Dragon of Dojima, noted bare-knuckle brawler and the nicest man in the fictional Tokyo neighborhood of Kamurocho. What would we do without him? PC gamers had a chance to meet him with Yakuza 0, Yakuza Kiwami, and Yakuza Kiwami 2, but we were missing about half of the story of Kiryu. Fortunately, the Yakuza Remastered Collection is bringing updated versions of Yakuzas 3-5 to PC. Unlike Yakuza Kiwami and Yakuza Kiwami 2, these games are not remakes, but facelifts of the original games, ported to PC. I had the good fortune of playing through these games on my PS4 last year, and so we’ll be taking a look at both how the ports handle compared to console, and how well the games underneath hold up for a modern audience.

THE DRAGON OF DOJIMA (FOR WINDOWS) 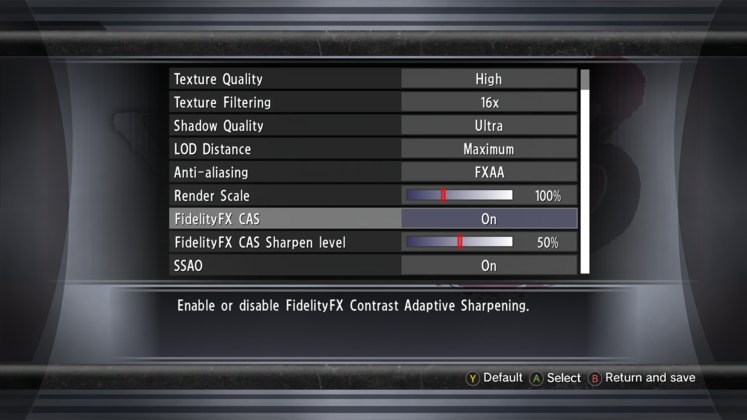 So, first things first, how does the port play? Well, I’m pleased to say that in my game time so far, I’ve seen very few performance related issues at all. I’ve been playing the games at Ultra quality on a GeForce 1060, and while they are older games, I did expect some stuttering or issues otherwise, but no, the games play beautifully. I came across no bugs in my playtime either, one of the few negative things I can say about the port is that there continues to be a lack of solid mouse and keyboard support. It’s possible to play the game on M&K but, as the loading screen reminds us, “REAL YAKUZA USE A GAMEPAD.” Definitely recommend playing with a controller, don’t bother with M&K.

As for graphical options, there aren’t a ton at your disposal but genuinely more than I expected, especially for Yakuza 3, which originally released in 2009. There are some options for general texture qualities, LOD distance, anti-aliasing, and render scale, along with some other fun bits and bobs. You can also set an FPS cap of 30, 60, or “Auto.” I hadn’t had an issue playing the game on auto, but I’ve heard from other folks that they saw some frame drops when on that setting, so I’d recommend setting it to 60 if possible. It is disappointing that it maxes at 60 FPS, but given that the games were built for 60 on console, it is a forgivable sin. Overall, the quality of the port is solid and otherwise inoffensive. But let’s talk gameplay… 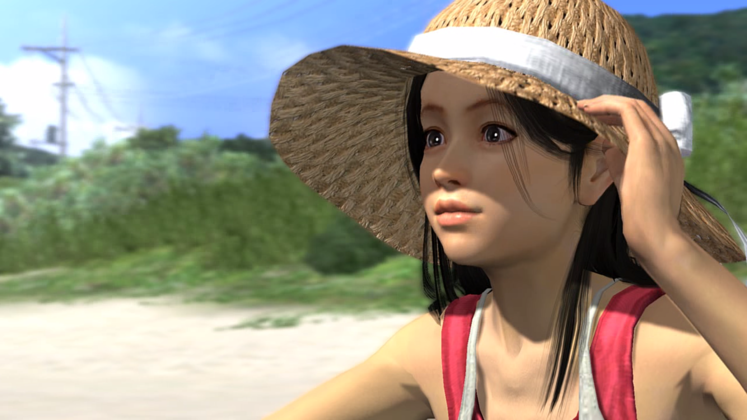 Yakuza 3 is a good game but can be a rough jumping off point for those unfamiliar with Kiryu’s story. You start off on Okinawa, running an orphanage, with Kiryu’s adopted daughter Haruka leading the rest of the children. Not much of what you’d expect from former yakuza, nor from a series about a former yakuza beating the hell out of hundreds of dudes. However, while the plot starts slow here, you’ll see Kiryu revisit some old haunts, and the story may be my favorite overall of any Yakuza game. It really goes places.

That being said, it is a dated game. The same DNA is there, you’ll know exactly what you’re stepping into if you played Yakuza 0 or Yakuza Kiwami, the foundations of the “old” combat system are here, and it’ll carry through the rest of the games in the Remastered Collection. It’s a very solid punching, kicking, grabbing, throwing, weaponing system, and while it’s a bit more basic in 3 than the others, it’s still very satisfying. Okinawa is also a standout location for the game, and there’s a lot to do in between fighting people, I quite like the golf mini-game, for one. This all being said… it’s old, and it looks old. It’s not terrible to look at, but you can tell, even with a bit of a facelift, that this game is from 2009. 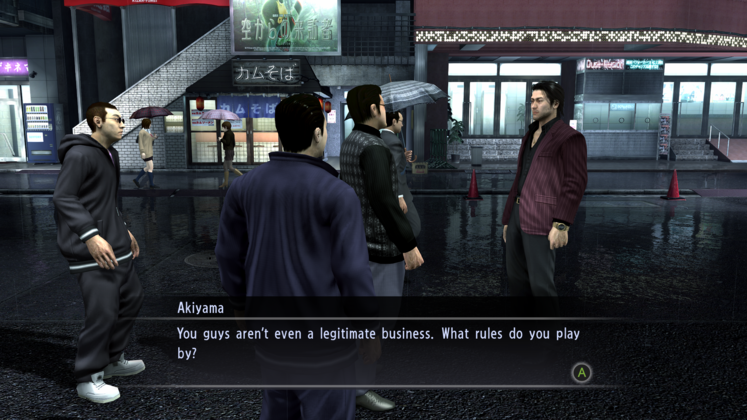 Talk about whiplash, you thought Kiryu starting an orphanage in 3 was wild, you boot up 4 and you’re not even Kiryu! You instead play as Akiyama Shun, a moneylender with a heart of gold. Shun accidentally bumps into a murder plot involving yakuza (because of course), and a plot that ends up involving some other player characters, Tanimura Masayoshi, and Saejima Taiga, and of course, Kiryu. 4 is an impressive game for a lot of reasons, not the least of which being that each of the 4 characters has their own distinct combat style and upgrades available to them. Akiyama is very quick on his feet and kicks his opponents, Tanimura uses a lot of judo and throws his enemies, while Saejima is built like a truck and will just beat the hell out of dudes. The diversity is refreshing, as even as fun as fighting as Kiryu is, getting the chance to switch things up is nice.

I will note though, the one major negative point of 4 is that it’s essentially impossible to jump between these characters up until the end of the game, and there is a lot of character-locked content, so you have to do it during that character’s segment or wait. It can be frustrating, but I found myself enjoying the story enough to not mind too much. Yakuza 4 is also a noticeable step up from Yakuza 3 in terms of graphics, while only releasing a year after Yakuza 3, the game looks much nicer than 3. 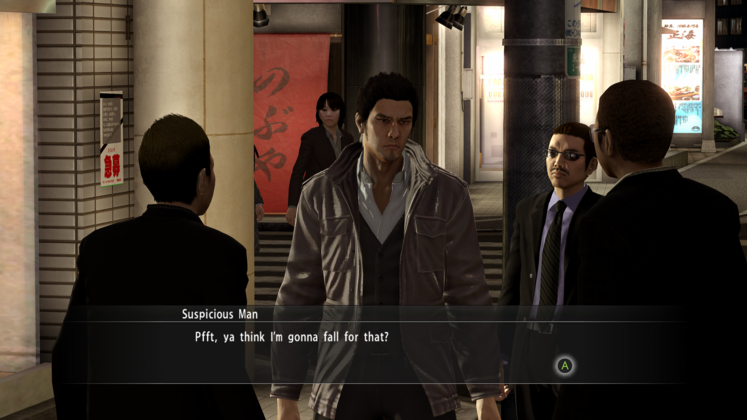 Yakuza 5 is probably my favorite of the 3 games in the collection. It learned lessons from Yakuza 4 and really expanded on the content available to each character because yes, this is another game with multiple player characters, a whole five of them this time, working independently of each other to a converging story, revolving around what else, but more yakuza intrigue. Three of the names from 4 return, with Kiryu, Akiyama, and Saejima coming back, and the unfamiliar name of Shinada Tetsuo appearing. He has an interesting combat style of his own, with a primarily weapon-focused moveset that somewhat subverts the classic “punch men repeatedly” style of most of the other main characters. The fifth character is Kiryu’s aforementioned adopted daughter, Haruka, you play as her in a rather extended section that removes you from the action of the plot to play as an idol. I mention this because, though I don’t like potentially spoiling new players, it does need to be said that there is a section that is several hours long at least of just Haruka becoming an idol.

For what it’s worth, I really enjoy the directions that 5 goes, but it does have a lot of content, with each character having full side-jobs they can take, and with Haruka’s non-combat section, it can feel bloated if you want to rush in. But to me, the beauty of the Yakuza games has always been the things you’re able to do in addition to following the main plot. Every character has so many side stories they can embark upon, and this is where much of the character of the Yakuza games lies. The stories are frequently funny, thoughtful, and occasionally even touching. There’s a lot there, but I don’t see it as bloat.

The Yakuza series is one of the best at what it does, being an Action-RPG with explorable locations. The games in this collection are dated, but even so, they perform well today and are still enjoyable to play. For players who have played before on console, pick this up if you want updated graphics and the ability to play through the series again without having to worry about backwards compatibility on consoles. For fans on PC who haven’t played the full saga, I highly recommend the Collection as it’s important to understanding the story of Yakuza, and is plenty fun to play, even if it’s dated. For any players who are new to Yakuza, I recommend first checking out Yakuza 0 or Yakuza Kiwami, they are better starting points, the Remastered Collection is not the best place to jump in.

Stepping back into Kiryu’s shoes in 3 was incredibly satisfying and emotional as a returning player. Also, then throwing a man into a wall shortly after was pretty good too. 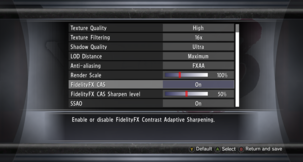