Chris Capel's troubles don't seem so far away, because he's playing this adventure

I had hope for Yesterday, you know. When I wrote my preview of this adventure I had a few issues but nothing that couldn’t be fixed. Let me keep things simple, as lord knows Péndulo Studios haven’t: nothing has been fixed, it's only been made worse. And yes, I’m not screwing around with this review.

Since story is one of the most important parts of an adventure game, let me start with that. I’ll have to leave several major points oblique since the twists come hard and early and are one of the best parts of Yesterday. After a beginning playing surprise nerd and jock duo Henry White and Cooper as they take down religious nut Choke and his creepy hobo friend, the game skips forward a few years and Henry is the head of a corporation investigating the murders of homeless people. To this end, they send amnesiac John Yesterday over the world searching for clues because apparently he was an occult expert once but can’t remember anything now. This is the point where I raised an eyebrow.


Up until here (roughly half an hour into the game) I had been annoyed by Yesterday for reasons I will go over, but the story had me intrigued. There’s a big plot twist after the opening (several in fact) and I was keen to see more. Sadly Péndulo were keener to take their characters to interesting places and do cool things rather than thinking of logical ways to get them to do either. Ignoring the police (which Yesterday utterly does), why did John get sent to Spain and then France over some murders in New York? A man who has no memory, who tried to kill himself the last time he was in Paris, and who spends his entire time once back in Paris searching for clues in his hotel room.

What’s worse, as the game goes along the storytelling becomes even more forced as the developers think up more things they want to do with John (“give him a secret occult past!”, “make him a ninja!”, “have him train with a blind Tibetan monk who somehow knows the term ‘mindfuck’!”) but have no idea how to actually properly integrate them into their storyline. Without warning the game will snap into flashbacks - which are actually quite cool admittedly and help to break up the plot, but the dots are never joined. Yes, it’s quite nice that he learned how to use a katana by solving very adventure gamey puzzles in the Himalayas, but why did he go there in the first place and where did he go after that?

So the story’s a colossal mess despite some interesting moments (if you think “colossal” is too mean, wait until I spring the most damning part later), and I’m sad to say the characters aren’t much better. I’ve already mentioned how Henry White chucks his money around with wild abandon, but there’s no motivation for anything he does (no spoilers) nor why he hangs around with Cooper – who at least was traumatized by a cruel Scout Leader. There’s a token female love interest whose entire existence seems based around being taken hostage, a perverted French hotel owner, and the borderline racist Himalayan guru.

Oh yes, and player character John Yesterday himself. John’s face looks permanently downtrodden, like his loan for a new Volkswagen has been turned down by the bank. Furthermore despite his cool abilities I utterly lost all sympathy for him the second he abandoned his girlfriend to a gun-wielding maniac by hiding behind a locked door – even though he was in no danger and only the girl was being threatened. And yet she still wasn’t upset by this enough not to hand him a crucial set of keys to the upstairs showroom. By the end of the game the player is still left utterly clueless by the goings-on of John, so it’s hard to feel interested in a man you really know very little about.

So the story and the characters are a bit underdeveloped (to put it mildly), how are the puzzles? Better I suppose, but still marred by massive flaws, leaps of logic and the kind of silliness the adventure genre regularly gets mocked for. Cat-hair moustaches have nothing on Yesterday. The first object in the game that gets picked up for no immediate reason? An empty coke can. Want to repair a broken payphone? Cut the receiver off a toy phone, swap it for another toy receiver, then instead of using the toy phone’s number pad use a toy musical keyboard (powered by batteries scavenged from another toy) to play dial the number for your friend’s mobile. Did I mention your character has an iPhone?


Describing the puzzles almost seems reasonable, but beyond the actual Hint system you’re not really given enough clues to follow the developer’s train of thought. Vital clues can be half-hidden behind background objects, items can suddenly appear in drawers where they weren’t before, and with one puzzle I was only given sufficient information to solve it after I’d already solved it (thanks to a bit of random inventory combining, that hideous hanger-on of the genre). Oh, and of course I was supposed to know I needed to sharpen the letter opener on the big stone horse head – when I didn’t actually know I needed to sharpen it at all.

On the bright side at least all the puzzles are confined to just 2-3 rooms, so there’s no jetting back to another country just to use a telephone (hello Mata Hari) and solutions do come much easier when you get to focus on a puzzle. On the other hand it also shows just how low-budget this game is. Better adventures allow you to be thinking about several puzzles at once, and even the basic Telltale episodes do that. Yesterday is far more linear with its puzzle solving, so if you get stuck you will undoubtedly lean on the Hint button.

Still, at least there is a Hint button, and that’s a good concession to the less-patient adventurer (or reviewer). A “Hotspot” highlighter (that highlights points you can interact with) is also present and welcome, although I wish the Hotspots hung around for more than a half-second. Useless inventory items are ditched after their relevant scene so if you’re carrying something it’s probably important somehow, and this also adds to the focused feeling. For the most part I also like how characters will “automatically” solve some puzzles if you’ve done everything necessary, so there’s no need to manually use several items on one object – the game knows you’ve solved the puzzle, so this is just helpful.

While we’re still being positive the graphics certainly deserve a mention. The Runaway series always had a very striking hand-drawn look to them and this continues to Yesterday. The game feels like a painting come to life, and style is always timeless. Locations could’ve done with a bit more animation however, as people will stand around frozen to the spot and nary a snowflake falls on the Himalayas. Lip-syncing during conversations is also a bit exaggerated, although that’s okay because so’s the voice acting and dialogue. The music is in general quite good though, even going so far as to be catchy.

If you can’t tell, I’m grasping at straws for nice things to say about Yesterday for the sake of a balanced review. It’s hard because the bad things vastly outweigh the good and everything good has something bad about it. Before I sum up I have to reveal the final damning fact: the game is pathetically short. If I’m being generous I could classify it in the 3-5 hour range, but I’m sure I didn’t take more than three. There’s alternate endings but I can’t imagine anyone would care enough to see them, and for £20 I just can’t recommend this to anyone.


Not that I would recommend Yesterday even if it lasted 20 hours and had a co-operative multiplayer adventure. As a graphic adventure and a game it’s just a mess. The story falls apart even if you just place the slightest bit of logic against it, with the majority of the plot being scenes that Péndulo thought would be cool rather than make any narrative sense. Likewise characters are generally unlikeable and have little motivation. Puzzles have some nice mechanics but are based seemingly around the philosophy of The Joker – you’re just doing things with no thought or plan. There's not enough clues given to solve most of the puzzles either, so they’re either easy or ridiculous. Of course everyone’s heard of the Scytale decoding system!

I had hopes for Yesterday, but they were beaten out of me during its absurdly short playing time. I got actively angry at the game at several occasions just because of the leaps of non-logic I was supposed to take. In the heyday of adventures this would’ve been rightfully mocked, and in a year that contains The Blackwell Deception (one of the finest adventures I’ve ever played) and the upcoming Double Fine Adventure it’s just as unacceptable now. For £20 you’re getting a 3-5 hour adventure with a nonsensical story, poor characterisation, and ridiculously obtuse puzzles with bad signposting. Do you want that? I didn’t think so.

Probably that twist at the end of the first chapter that turned the whole story on its head. So that’s why I felt so ill for the rest of the game.

I had hopes for Yesterday, but they were beaten out of me during its absurdly short playing time. I got actively angry at the game at several occasions just because of the leaps of non-logic I was supposed to take. In the heyday of adventures this would’ve been rightfully mocked, and in a year that contains The Blackwell Deception (one of the finest adventures I’ve ever played) and the upcoming Double Fine Adventure it’s just as unacceptable now. For £20 you’re getting a 3-5 hour adventure with a nonsensical story, poor characterisation, and ridiculously obtuse puzzles with bad signposting. Do you want that? I didn’t think so.

Probably that twist at the end of the first chapter that turned the whole story on its head. So that’s why I felt so ill for the rest of the game. 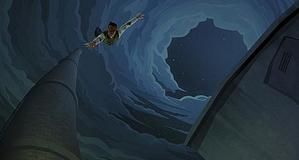