One of those games with a title which is so bizarre you don't really take notice of it, ZAMB! Biomutant Extermination is a self-proclaimed tower-defence brawler hybrid. It proposes an easy-to-learn but complex-enough-to-be-enjoyable experience which combines futuristic action-based hack-n-slash with the central concept of defending against wave after wave of enemies and protecting your objective. The idea is promising, the presentation is ideal, and it delivers well in more ways than one.

There are two asymmetrical playable characters in the game; Chrome, who can build turrets and has a ranged attack; and Cye, who can only move turrets already placed but has powerful special attacks and traps (mines, powerful projectiles, and so on). In every game, both characters feature. If you play single-player, you can switch between the two with tab and the other becomes AI controlled. The AI tends to stay close to you and just use the standard attack, which is more or less what you want. You can also play client-side co-op by using a game pad, or you can play over the internet. I didn't have much success testing internet multiplayer. The lobby system doesn't allow you to see which map people are currently waiting to play for, which would be desirable. Using trial and error I wasn't able to find a game. You can invite friends through steam, that would probably work better.


In each map you have several reactors. Normally these start out dormant and you have to 'hack' one in order to claim it and begin the onslaught. The waves of enemies can come from various spawn spots which you can see from the word go, and normally they follow a path to attack the nearest reactor - which you are also able to see as a drawn line on your screen. If a path is blocked then they will try to go another way, which can cause you more problems. In order to defeat the levels you have to hack and defend all the reactors on the map. If all the reactors are destroyed or if both players die then you lose. If only one player dies, they can retreat to a friendly reactor and respawn their partner with a 6 second delay.

The normal form of play involves combining tactical placement of turrets with local brawling defence and Cye's special attacks. Turrets and special attacks cost diamonds to place, this is earned from collecting enemy drops. These actually de-spawn if you don't collect them within a few seconds, which means you can be running around getting pickups if you have turrets killing things all over the map. There are also turret placement pads which boost turrets in different ways thereby giving you an extra consideration on tower placement, the best one by far appears to be a platform which gives a boost to the tower's attack range. Towers can be moved at any time by either players, meaning you can scramble your defences to a new spot if you see the need. In addition to all that, players also build up a boost bar when attacking which, when full, can be used to temporary boost damage given by a huge amount.

After completing each level you are awarded stars based on your performance; one to three based on your combined score, and then three other stars are available based on completion of special requirements which vary from level to level. These extra objectives provide a new level of challenge as they often include things such as, "don't use any healing" or "equip only one type of turret."


There are a pretty decent range of turrets and special attacks in the game which do four different types of damage; cold, impact, poison and electrical. Some of these have special effects, for example cold slows down enemies and poison causes damage over time. By combining different turret attacks and Cye's attacks you can create combos to rack up extra damage, XP and score. There is also a healer turret and Cye has an area of effect heal ability, both of which can even heal reactors and turrets when upgraded. Turrets and abilities can be upgraded and customised as you wish in-between levels by using 'SP' which is earned as the characters level up. You can completely re-spec without any extra cost, so there's no need to worry about committing to the right build.

Two of the 29 playable levels are tutorial levels. The tutorial is simple, unobtrusive and to the point. It does an excellent job of quickly introducing the player to how the game works without being a pain. Then the game is split into three different locations, the workshop, the mine, and the lab. The first level of each of these zones can be played right from the word go, although to play each respective following level you have to at least finish the one before it. At the end of each section there's a boss, meaning there's three in the game. These provide a unique and slightly different challenge to the normal levels as the bosses are often large, stationary and use powerful attacks.

The game is presented perfectly; cartoony, action-packed and explosive. In some ways you almost feel like you're playing an arcade game, which definitely makes this a different kind of tower-defence experience. The sounds are punchy and the music is both repetitive and energising; in other words, it's a great fit.

The one thing I feel is missing from this title is a true difficulty setting, aside from the natural increment in difficulty over time there is no option to change it. I understand that you can go for all the stars and to some extent that provides a new layer of challenge, but sometimes you just want more enemies, or harder-hitters, or less player HP. I powered through this game in 5 hours and although I had great fun doing it, I'd have liked to be able to do it all again but with more of a challenge.

Aside from being a mouthful to say, ZAMB! Biomutant Extermination is a definite hit in my book. It’s easy to learn, and since levels never last too long it has the option of being played in bite-sized chunks. It’d be nice to see a couple of difficulty settings in the future as this would add another level of replayability on top of the challenge of simply achieving all the stars. Right now, that’s the only thing I think it’s lacking, and surely it wouldn’t be too hard to implement. Overall, this is a game which doesn’t require too much time commitment or thought, but is really enjoyable nonetheless. Thumbs up!

Laying waste to a huge group of enemies in one go and getting the ‘Massive Pwnage’ message burst onto your screen. 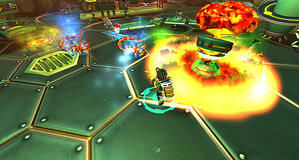