Grundislav Games' roaring twenties crime adventure A Golden Wake is on the way this month, and the developer has released a demo to get you in the mood for tommy guns, private eyes, bootlegged booze and... property management.

A Golden Wake is a point and click adventure set in the glitzy suburb of Coral Gables, an area at the centre of the Los Angeles real estate boom of the twenties.

Grundislav Games and Wadjet Eye Games are bringing the roaring twenties crime adventure A Golden Wake to PC, Mac and Linux this October 9, and they've just opened up pre-orders.

Set in the glitzy, Gatsby-esque suburb of Coral Gables, A Golden Wake casts you as wannabe entrepreneur Alfie Banks, a young whippersnapper trying to make his fortune while doing his best not to get killed by the mob. 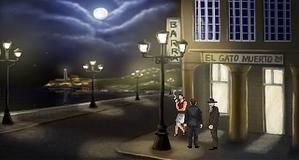