To sum up, this game is so playable, it nearly hurts.

Of Ensemble Studio's oeuvre of real-time strategy games, Age of Mythology often gets overlooked. The 2002 title was dismissed in its day for just being "Age of Empires in Ancient Greece", but the gameplay mechanics involving the Greek pantheon and mythological creatures added enough of a twist to give the game its own feel. Now, 12 years after its release, it's getting a new official downloadable content pack, Tale of the Dragon, on the 28th January 2016.

Age of Mythology is getting a new, Chinese-themed expansion

It's been thirteen years since Age of Mythology launched, adding a supernatural spin and a shiny 3D engine to the classic real-time strategy series. You might think your odds of getting a new expansion would be pretty low.

We reported the existence of Age of Mythology: Extended Edition yesterday, but now the remastered version of the classic strategy game has a new trailer, showing off the improvements in graphical fidelity.

Ah, Age of Mythology. Where you could pit Kraken against Colossi, Sphinx against Manticore. Then start throwing meteors at people. Fans of Ensemble Studios' classic RTS will be happy to hear that it's coming to Steam in remastered form with several new features and updated graphics. 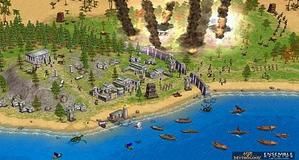