Aion, the latest offering to the MMO Gods has met with some success since launch, but can it do better? (PC)

With the new Aion expansion, Steel Cavalry, just around the corner, developers NCSoft have released a new video of the Aethertech, one of the new classes to be introduced to the game.

The Aethertech will bring new playstyles to the popular MMO in a free expansion, alongside two new instances, more skills, balances and improvements.

Aion, the "hardcore" MMO featuring winged players, has made it to its fourth year, and publisher NCSoft is helping celebrate with a series of PvP events for the next few weeks.

Next month will see NCSoft release update 4.0 for free-to-play Aion, and there's a micro-site up and running to better explain what the Aion team has in motion, as well as a trailer. 4.0 brings the Artist and Engineer.

However 4.5, which releases later in 2013, will be adding the Rider class. Level caps raise to 65 and there'll be 3 new areas and 6 instances. Some UI tweaks are also inbound.

In their Q1 fiscal 2013 report, NCSoft has revealed that Guild Wars 2 has dropped significantly in sales figures, but the company is far from in trouble. A 35% drop in sales from last quarter is revealed.

However operating profit, while down 51% from last quarter, is in fact a huge 348% boost year-on-year as it hits ₩55,512 million. Last quarter held the launch for Guild Wars 2. 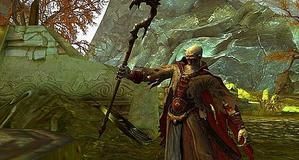