Alan Wake returns before we'd barely even said goodbye, in American Nightmare; a guide to surviving with nothing but a flashlight and a magic typewriter.

Oh, Remedy, you’re such a terrible tease. Not only do your games take a half-decade to come out, they’re already filled with hints of what’s coming next.

Remedy has confirmed that a PC version of Alan Wake's American Nightmare is coming, and that it will be landing on Steam on the 22nd May.

The game can be preordered from Steam now, and there is a 10% discount for preorders, and an additional 15% for owners of the original game.

Sony agree with Chen's assessment, commenting that the "primary PSN audience is indeed more adult," and their best-sellers reflect that. Many PSN titles require 'deep thinking'. 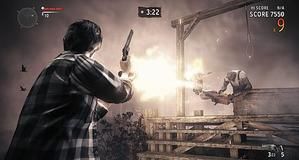