E.T with an attitude problem.

Sci-fi shooter Alien Rage is out tomorrow, September 24th, and delivers uncomplicated 'shoot and shoot some more' FPS gameplay to our keyboards, mice and gamepads. We'll "unleash a fury" in weapons.

We'll be spraying the walls with alien mess through 14 levels, using ten epic weapons - which we'll need to face the "unstoppable mega-sized bosses" looking to stomp us.

CI Games has announced their sci-fi shooter Alien Rage will be out September 24th on Xbox Live, PlayStation Network and PC. They've also released a new cinematic trailer to whet our appetite for alien squishing.

This new trailer explains the backstory to City Interactive's Alien Rage, which revolves around a power source known as 'promethium'. We have to safeguard the stuff from falling into the wrong hands. 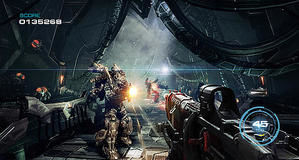