The first game from Assassin's Creed creator Jade Raymond and EA Motive will be "a brand new action franchise", despite Raymond's previous suggestions she was working with Amy Hennig on a Star Wars game. However, it won't be out until at least 2021.

Assassin's Creed Is Now Confirmed To Make An E3 2017 Debut

With all the Assassin's Creed rumors floating around so close to E3, it's only natural to assume things will become official in no time at all. If you bet on that possibility, you're in luck! Ubisoft have confirmed the latest entry in their stabbing simulator will be at the event.

Break out the history books and turn to Ancient Egypt. A point in time that regularly fascinates youngsters getting their primary school fix, it seems increasingly likely to be the time period of the next Assassin's Creed game.

Ubisoft has released some stills from the upcoming Assassin's Creed film, showing off Michael Fassbender in action in his dual role of 15th century Spanish assassin Aguilar and his modern day descendant Callum Lynch.

As with Desmond Miles from the video games, Lynch is descended from a long line of Assassins, and, as with the games, is probably a prisoner of Abstergo, the front company for the Templars. The organization is led by Alan Rikkin, played by Jeremy Irons.

There has always been speculation about the possibility of the Assassin's Creed franchise delving into more Oriental affairs. A recently uploaded video may have hints to the confirmation of a 2016 title that will do just that. 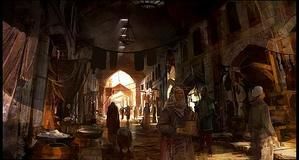