Is Batman: Arkham Origins - Blackgate Deluxe Edition the most unwieldy title in the history of video games? Very possibly, but whatever. The re-tooled PS Vita brawler is out today on Steam, and Warner have released an accompanying launch trailer.

The next story DLC for Batman: Arkham Origins, which is WB Games' focus now, will be arriving April 22nd according to a leaked trailer. The next add-on is titled 'Cold, Cold Heart' featuring Mr. Freeze.

An award ceremony at Wayne Manor gets an unexpected cold front and will be arriving on PC, Xbox 360 and PS3, but not on Wii U because of 'poor demand' for Arkham Origins. 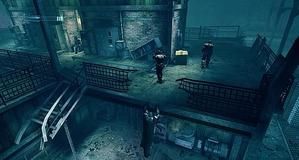