The Close Quarters downloadable content is free for Battlefield 3 owners on all platforms if they act fast. PC players can get it free by merely using BF3E3 in the Redeem Product Code section of the order form.

Criticisms against DICE for 'abandoning support' are "just sad"

DICE executive producer Patrick Bach has said the studio is no stranger to being on the receiving end of the communities' sharp tongue, accused of stopping support for past Battlefield titles.

He notes that people "tend to forget" they were working on "three other" Battlefields between 2 and 3. Now they're getting flak for working on Battlefield 4, despite offering a Premium service.

This week's US PlayStation Store update debuts the latest Battlefield 3 expansion Close Quarters for PS3, as well as Magic: The Gathering - Duels Of The Planeswalkers 2013. 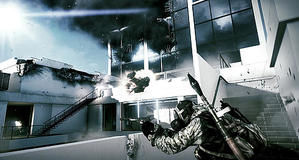