Publisher Bigpoint behind such free-to-play MMOs as Battlestar Galactica and Drakensang Online has managed to accumulate over 250 million registered users around the globe.

It's based purely on the number who've signed up to play one of Bigpoint's 60 free-to-play titles. It's a self appointed champion of the 'free model', bemoaning who don't 'get it'.

Battlestar Galactica Online worth a million a month say BigPoint

The love of sci-fi TV series Battlestar Galactica is still beating strong despite having ended a while back now. In fact it's been BigPoint's "best start" ever.

BigPoint CCO Nils-Holger Henning believes it's going to pull in EUR 1 million each month. The free-to-play MMO lets you play as human or crafty cylon.

The browser-based space combat MMO Battlestar Galactica Online is now in open beta, allowing anyone to side with the humans or the Cylons in open conflict among the stars.

Bigpoint has released a gameplay trailer of Artplant's upcoming space sim combat MMO Battlestar Galactica Online, as humans and Cylons get it on in deep space - from a combat standpoint that is. 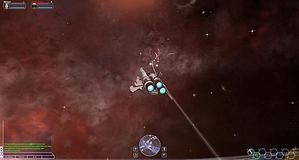