We got no troubles, life is the bubbles, under the sea.

New trailer for Burial at Sea Episode 2 for BioShock Infinite

A new preview trailer glimpsing the opening moments to BioShock Infinite's Burial at Sea Episode 2 has been released by 2K Games and Irrational. No actual release date accompanied the tease.

The Season Pass has promised all included DLC would be out by March 31st. It goes without saying that this preview trailer is bloated with spoilers, and sees the return of...

BioShock Infinite developer Ken Levine is defending the shortness of Part 1 of the Burial at Sea DLC, which can be completed in less than two hours.

Irrational has announced that Part One the single player campaign DLC for BioShock Infinite "Burial at Sea" will be arriving on the 12th November.

Irrational has confirmed that eight employees have been laid off by the developer, which is currently working on the Burial at Sea DLC for BioShock Infinite. 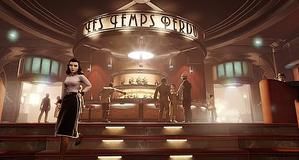