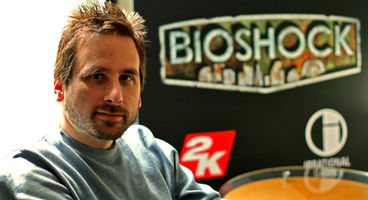 Levine made the shock announcement via a posting on the official company website. Currently they're taking the time to help employees who are leaving to build their portfolios.

Take-Two is also having other internal studios make offers to affected staff, and they're planning to hold a recruitment drive with third-parties where they'll host interviews etc. Ken Levine had considered leaving Take-Two altogether to found a new start-up, but the publisher convinced him to stay and pursue his new projects with them.

"We built Rapture and Columbia, the Von Braun and The Rickenbacker, the Freedom Fortress and some of the nastiest basements a SWAT team ever set foot into. We created Booker and Elizabeth, the Big Daddy and the Little Sister, MidWives and ManBot. In that time, Irrational has grown larger and more successful than we could have conceived when we began our three-person studio in a living room in Cambridge, MA. It’s been the defining project of my professional life."

"Seventeen years is a long time to do any job, even the best one. And working with the incredible team at Irrational Games is indeed the best job I’ve ever had. While I’m deeply proud of what we’ve accomplished together, my passion has turned to making a different kind of game than we’ve done before. To meet the challenge ahead, I need to refocus my energy on a smaller team with a flatter structure and a more direct relationship with gamers. In many ways, it will be a return to how we started: a small team making games for the core gaming audience," posted Ken Levine.

"I am winding down Irrational Games as you know it. I’ll be starting a smaller, more entrepreneurial endeavor at Take-Two. That is going to mean parting ways with all but about fifteen members of the Irrational team."

"There’s no great way to lay people off, and our first concern is to make sure that the people who are leaving have as much support as we can give them during this transition."

Levine describes what's next for the studio. "In time we will announce a new endeavor with a new goal: To make narrative-driven games for the core gamer that are highly replayable. To foster the most direct relationship with our fans possible, we will focus exclusively on content delivered digitally."

BioShock Infinite is about to receive it's last DLC which finishes up their episodic spin-off adventure, which has Booker and Elizabeth in Rapture before the events of the original BioShock.