NCSOFT are still hard at work trying to retain their stance on MMOs. Being the folks behind the ever-popular Guild Wars franchise and having launched Blade and Soul last year, they're gearing up to support yet another new title alongside their current offerings.

Bringing with it 2 new dungeon scenarios and a much-awaited spectator mode, the October 5th content update for the stylish MMORPG Blade and Soul brings more reasons to punch and kick everything in sight.

The release of the Ebondrake CItadel dungeon comes in the usual two flavors of both 4 and 6-man versions. Described as a "Formidable prison of evil", there isn't a whole lot to show outside some splash art on the official website.

Blade and Soul, the free-to-play Korean martial arts MMO, is getting more stuff! For free!

The Electronics Sports League (ESL) has announced that the first Blade and Soul tournament with North American and European contestants will be held on the 7th February; the tournament is called the Blade and Soul 1on1 Community Cup #1. Anyone with a 15th level character or higher can participate. 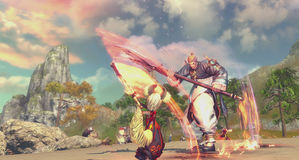