Focus Homer Interactive that yet another special edition of their Games Workshop-licensed game will be coming this September, Blood Bowl: Chaos Edition. 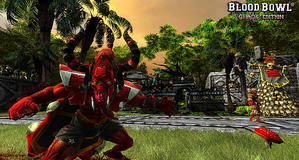