The Xbox Live Marketplace calendar from now until mid November has been detailed by Major Nelson. Today will release BurgerTime World Tour on Xbox Live Arcade.

Next week there's Fusion: Genesis, as well as some Dead Rising 2: Off the Record skill pack DLCs. Games on Demand adds Enslaved and Marvel Vs. Capcom 3.

Publisher MonkeyPaw Games has announced that Burgertime World Tour, an update to the classic coin-op arcade game, will be delayed til "a late October/early November date." The reason for the delay is that Monkeypaw wants the game to have "a fresh new multiplayer experience, including competitive online play and leaderboards."

The ESRB ratings have once again leaked an unannounced game, and this time, it’s BurgerTime HD. 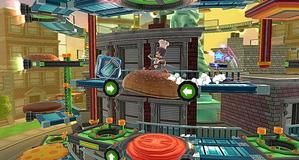