Sci-fi horror game Caffeine to be released this October

Caffeine is a game in which you explore a ship that mines coffee from space. I am assuming that developer Dylan Browne has a spectacularly plausible lore explanation as to how and why that happens.

More than that though, it's a game about exploring creepy sci-fi environments in first-person, and creeping yourself out while doing so.

Incandescent Imaging, otherwise known as Australian solo developer Dylan Browne, has released a free demo for his indie horror title Caffeine, which is set on a seemingly abandoned mining ship.

Of course, it's not really going to be abandoned, is it? The fact that the game's inspired by first-person horror games like Condemned, FEAR and Outlast should clue you in to that. This demo was first shown off at AVCon 2015.

It will be split across three episodes as the story itself has "three distinct sections" to transition between, so it was a natural fit. Who knew caffeine mining in space could be so terrifying?

First time developer Dylan Browne is seeking another round of Indiegogo funding for his sci-fi horror adventure Caffeine.

Incandescent Imaging has just released the first update to their science fiction horror game Caffeine, which is currently available as a pre-release demo. The game is powered by Epic Games' Unreal Engine 4.

It switched from Unreal Engine 3. The additions in this update include a new reception area to explore, along with four new resolutions above 1080p. They also fixed corner collisions. 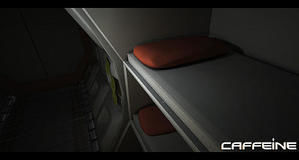