Castle Crashers has the legacy of ushering a new era of video games published under indie reigns. It was in 2008 that The Behemoth rolled out their hand-drawn beat 'em up and now they're moving an update onto PC that allows much smoother graphics and frame rate on the classic indie title.

The Behemoth has announced that a new content update will be coming to the Steam version of their four-player co-op beat'em up Castle Crashers, "Barbarian Makeover".

Apparently it's the season of free remasters. Following on from The Astronauts' work on the Ethan Carter Redux comes news that The Behemoth is giving its 2D arcade brawler Castle Crashers a fresh lick of paint.

"We’re currently developing a Steam update of Castle Crashers 'Remastered' that will incorporate the increased frame rate and behemoth texture sizes and almost all the other cool enhancements that we recently released on Xbox One," writes the team. "We’ve even included the new, super fun, multiplayer mini-game, Back Off Barbarian! It’s amazing! Your eyes are going to bleed it is so beautiful!

The quite excellent Castle Crashers and BattleBlock Theater universe is expanding with the studio's 4th Game, as it's currently titled. The Behemoth are sticking with their tried-and-true art style and laugh-out-loud humour.

This time it's a turn-based strategy set on a world after a giant space bear crashed into the planet, unleashing waves of chaos that seem to be directed or influenced by a sadistic narrator. It's coming to Steam. 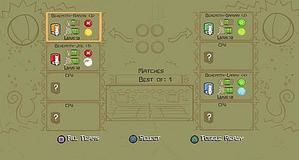