Champions Online gets a new class: The Witch

Champions Online an MMORPG that has been somewhat low on players and is perceived as a failed MMO is still receiving content updates, the latest of which have added a new archetype to the game: The Witch.

Something has been missing from Champions Online. Every hero needs a swanky vehicle. Your chance to control a customised motor is going to appear in the game's next update, which is due to arrive this week.

Crypic has sent out an email to their subscribers past and present announcing that after a "routine security checks and upgrades", the company found that "an unauthorized party" might have accessed their account information, including their password.

UPDATE: John Smedley has clarified what he told a Chinese website about Planetside 2 in an interview as there was some "really bad translation going on". There will be no "RMT auction house" in SOE's Planetside 2, and its beta isn't locked down yet.

Atari has announced that it has sold Cryptic Studios, developer of City of Heroes, Champions Online and Star Trek Online, for $50M to Perfect World Entertainment, a major Chinese-based MMO publisher, best known for such MMOs as Perfect World, Ether Saga Online and Jade Dynasty. Cryptic had originally purchased Cryptic for $27M. 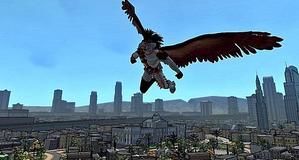