Trion Worlds announced this morning that it will be releasing the first major content update since launch for its MMO-ARPG Devilian.

The Fury of the Tempest update introduces the Vanguard of Nala to the new Tempest class, who is said to be a master of blades and acrobatics. The update also adds two new Archdevil dungeons, a raid dungeon, four new dungeons, an increase in level cap to 54, and four new sets of gear.

Devillian gets Fury of the Tempest update including new class

Western publisher Trion Worlds has announced that the first closed beta period for MMO action RPG Devilian, already a big hit in its native South Korea, will kick off on October 22, and run through to October 26.

Although becoming a Founder by pre-ordering is the only way to definitely net your place in the Beta, Trion says it will be giving out keys via the game's various social media pages, so keep an eye out if you're interested.

Feeling half-devil? Free-to-player action RPG Devilian will be dragging Europe and North America through its dungeons later in the year, but right now you can sign-up for the Beta through the official Devilian website.

This hack 'n' slash has four half-devil character classes to choose from with demon-infested dungeons to carve through, not to mention PvP battlegrounds. It also has crafting, customisation, quests, trading and more. 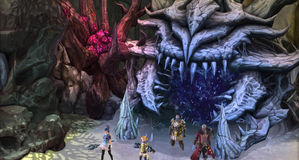