The Brigmore Witches is the next downloadable content coming to Arkane's Dishonored and Bethesda has released some teasing artwork ahead of their official announcement, which should be dripping with more info.

The team said that "Daud's journey concludes," with new details due real soon. Daud is the assassin responsible for the death of the Empress, and in The Knife of Dunwall we explore his world.

Bethesda talks up likelihood of Dishonored sequel, more Rage "to be determined"

Arkane's Dishonored was a knife in the dark, and a very lucrative one at that for Bethesda. Pete Hines says they "try not to wade into anything as a one-off" from the start, and Dishonored appears to fit the bill.

Bethesda feels it's a franchise and it will be staying with Arkane. What about id's Rage? Right now the Doom creators are "full bore" on their current project, with Hines "super happy" about their work.

The pre-order incentives to slap cash down for in Arkane's Dishonored have all been lumped together in an upcoming DLC called Void Walker's Arsenal, which includes four different packs of various goodies. 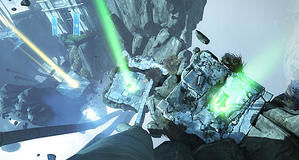