Doctor Who: The Eternity Clock Summary

The fellows at NeoGAF spotted an interesting item on Sunny Mody LinkedIn profile under "Experience", which stated "I am currently at Supermassive Games working on an unannounced 'AAA' game for a next generation Sony console."

Dr. Who: The Eternity Clock dated 23rd May

Sony has announced that the upcoming sci-fi platformer Dr. Who: The Eternity Clock will be available on the PlayStation Network on the 23rd May. The game will also be launched in UK retail on the 25th May.

BBC halt Doctor Who: The Adventure Games, "no current plans" for any more

The BBC is slamming the brake on Doctor Who: The Adventure Games as they focus their attention on other ways to exploit the IP, namely with their new The Eternity Clock project.

The Adventure Games have "done a great job," but the BBC want to move on. The Cardiff team will continue to look at ways of "audience expansion" for the UK license payers.

Dr. Who: The Eternity Clock to run on Unreal Engine 3

Epic's European chief Mike Gamble has revealed that developer Supermassive Games has licensed the Unreal Engine 3 for the upcoming Doctor Who: The Eternity Clock puzzle platformer coming to PC, PlayStation 3 and Vita.

Doctor Who: The Eternity Clock Essentials 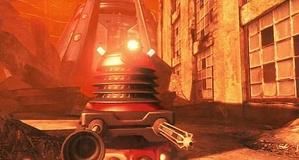