Focus Home Interactive has announced that Farming Simulator 15 Gold Edition will be coming on 29 October 2015. The standalone expansion contains a new environment and 20 new vehicles.

Focus Home confirm Gamescom line-up, The Technomancer and Act of Aggression among them

We're almost ready for Gamescom in Cologne, Germany and so Focus Home Interactive have published their games attendees list for early next month. Larian Studios' repackaged Divinity: Original Sin Enhanced Edition will be there.

So will Blood Bowl 2, and Spiders' cyberpunk RPG The Technomancer. Let's not neglect the real-time strategy Act of Aggression or the hardcore sci-fi RPG The Surge.

Yes, as the appetite for Farming Simulator is apparently rabid, peripheral maker Mad Catz has decided it's time to get in on the action and work on some dedicated controller hardware for the series.

Just a few days from its release this Thursday on PC, Focus Home Interactive are pleased to lead you to the fields of Farming Simulator 15 one last time with the launch trailer. Here's a good opportunity to get a last sneak peek at some of the many activities that are yours to enjoy in the new generation of Farming Simulator, available on October 30 on PC/MAC. 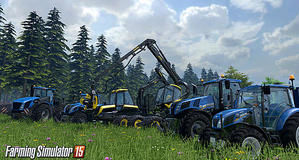