17 December 2014 | By SimonPriest
Yes, as the appetite for Farming Simulator is apparently rabid, peripheral maker Mad Catz has decided it's time to get in on the action and work on some dedicated controller hardware for the series.

Whooshing through the air or even space aren't the only escapist destinations when it comes to simulators. Who knew farming would prove so popular? Let's not count a certain farm + ville. There's already a dedicated page on Mad Catz' official Saitek website, a brand that was until now primarily concerned with flight. 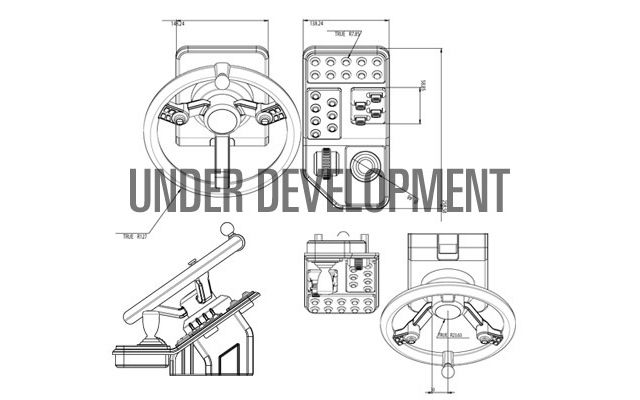 "Forget about using racing wheels to play Farming Simulator, you'll be driving your vehicle with a properly tilted, center sprung steering wheel with 900 degrees of turning and a wheel turning knob—just like the real thing!"

"On the wheel, a Mini-stick controls your movement when not in your vehicle and real buttons allow you to use your in-game PDA. Gas and brake pedals come standard with the wheel, too."

"Most exciting of all, Saitek is developing a Vehicle Side Panel exclusively for this game! The Side Panel features a Front Loader Control Stick to give you precise control of your vehicle's front attachments and fully programmable buttons for tool attach/detach, tool switching, reverse, lights, horn, cruise control, and more!"

Yes this really is happening. Admittedly a great deal of the popularity for the Farming Simulator games has surrounded its modding community, which put together 'deathmatch' modes where various farming vehicles would battle it out, like 'jousting' on a bridge - just like real farmers!

Other than a release in late 2015, there's nothing concrete on the design or price of the controllers.