Yes, as the appetite for Farming Simulator is apparently rabid, peripheral maker Mad Catz has decided it's time to get in on the action and work on some dedicated controller hardware for the series.

Giants Software has announced that the Titanium expansion to their sim Farming Simulator 2013 will be released tomorrow on PC. The expansion will add all of the new features and content that were introduced in the recent Xbox 360 and PlayStation 3 versions of the game.

Volition's Saint Row IV really speaks to the British public as it keeps the UK chart crown for its third week running. Marching in formation right behind it is Creative Assembly's Total War: Rome II.

Farming Simulator on Xbox 360 and PS3 this summer

The unbelievably successful hit that was Farming Simulator on PC is now coming to Xbox 360 and PS3 this summer. The farm sim on consoles has an all-new American backdrop for that Smallville vibe, I guess.

Focus Home has released a trailer proving I'm not just messing with you; this is actually happening. Until now your summer was filled with picnics and playtime - now it's back to the farmhand days.

Such is the odd cult following of Faming Simulator that it's going to get a release on Xbox 360 and PS3. Giants Software will be unleashing their agriculutral best-seller in the first week of September this year.

The game world is 'doubled' with exclusive land for the console versions, as well as exclusive farming vehicles. Who knew virtual farming could be so fun outside of a Facebook setting? 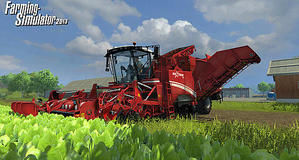