Field of Glory II Lives Up To A Legacy Of Exemplary Table Top Strategy.

Alongside hosting a special sale each day over the next five days, Slitherine is also gifting a free copy of its first game, Legion, for every purchase.

The popular historical turn-based strategy Field of Glory II has announced a brand-new DLC for fans to look into: Wolves at the Gates.

Rise of Persia DLC Released for Field of Glory II

Experience the last flowering of chariot warfare in the ancient near-East in dynamic turn-based combat of Field of Glory II.

The upcoming DLC for Field of Glory II will feature the ancient Persian civilisation so that they could duke it out with other historic giants in a - you've guessed it - field of glory. 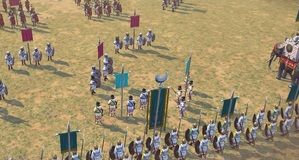