Sports Interactive have just booted a hotfix patch to Football Manager 2015, taking the game to version 15.1.4. It optimises save speeds, fixes a rare crash and should stop game launch troubles.

The Match Engine has also seen a number of tweaks like player movements and the mighty power of the offside rule. The Greek Superleague scheduling was also fixed.

Sports Interactive has released a video showing off all the new features added to its annual 'spreadsheet to end all spreadsheets' Football Manager series. Better set some time aside to watch it, though - it clocks in at around 30 minutes.

Features on the way in Football Manager 2015 include; a redesigned user interface with a streamlined sidebar, customisable management styles, better animations and visual effects in the match engine and a bunch more stuff that only hardcore FM nuts will find at all exciting.

We have the release window for Sports Interactive's next season of always stressful, sometimes maddening and sometimes wonderful football management.

Football Manager 2015 is coming this November, and it's up for pre-order right now. 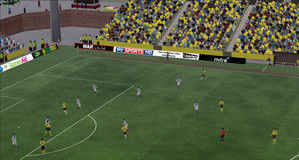