Guacamelee may take inspiration from some of the classics of gaming history, but this is a whole new experience that's well worth a look.

The hit Mexican wrestler-themed side-scrolling action game Guacamelee! is coming to Steam on the 6th August, as a Gold Edition which will include the two released DLC packs for the PSN version. The game will cost $14.99 USD.

Developer DrinkBox Studios' masked luchador game Guacamelee has gotten a positive response from fans and critics, and studio co-founder Graham Smith has revealed that downloadable content will be announced "in the coming days".

Drinkbox Studios has announced its latest game for PlayStation Network, Guacamelee, which is basically a Medroidvania-style game starring Mexican masked luchador wrestlers, with an art style reminscient of El Dia del los Muertos (The Day of the Dead) calicas. 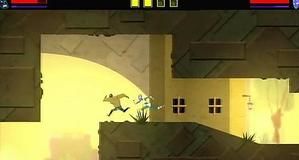