If you happen to own the Exclusive Edition of noirish stealth game Gunpoint, or its Exclusive Extras DLC pack, you can take part in the first Alpha test of Tom Francis' next project Heat Signature.

It's a spaceship hijacking game that's in the very early stages of development, and as such it's not a very polished experience right now. Francis is clear that you shouldn't buy Gunpoint in order to access the Alpha, and says it will be shut off in two weeks anyway, after feedback has been gathered.

Designer Tom Francis says that the new engine will "fix many technical issues and make the game run faster for everyone, and it’ll enable us to develop Mac and Linux versions next."

Former videogame journalist Tom Francis' first indie game, Gunpoint, cost the developer a whole $30. The flood of sales of the game have enabled Francis to quit his job and be a full time developer.

PC Gamer's Tom Francis is taking preorders for his action-stealth-puzzle game Gunpoint, which will be available on the 3rd June. 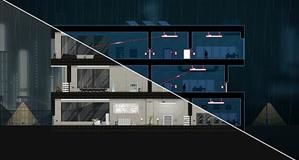