Undead Gunslingers, Psychics, and Demons all wrapped up in a Tactical Western Adventure.

Developer CreativeForce has released a gameplay video showing off the first 15 minutes of their Weird West tactical strategy-RPG Hard West, where cowboys mix with the supernatural and demons. The video showcases direct gameplay footage from the game's campaign, including the cutscenes. It also illustrates some of its combat mechanics that seem to be a cross between Jagged Alliance and XCOM.

Hard West is due to be released on 18 November 2015, and is published by Gambitious.

Gamers interested in playing the supernatural Old West game Hard West will have to be patient, as the game has been delayed two weeks to 18 November 2015.

Gambitious has announced that "Weird West" turn-based tactical strategy-RPG game Hard West will be available on PC on 4 November 2015. The regular edition of the game will cost $19.99, while a Collector's Edition will cost $24.99 The latter will include the original soundtrack, a digital art book, and digital comic. 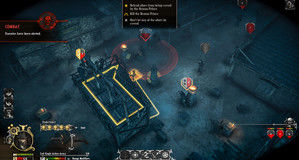