The Kickstarter for the 1980s set Jagged Alliance: Flashback is entering its final moments with just under 60 hours left on the clock. It needs $350,000 to succeed and has around $270k from over 5,400 backers.

Full Control has had great support from the Jagged Alliance community, including the modders. Flashback explores the roots of the fictional merc group A.I.M.

Want some more game with your game? Danish developer Full Control has announced they've partnered with Humble Bundle to bring Kickstarter backers the 'Classic Pack' if the campaign succeeds.

The original Jagged Alliance, JA: Deadly Games, JA2 and JA2: Unfinished Business comes as part of the Classic Pack, which is in English and in full support of Windows 7.

Danish developer Full Control has posted their proposal for Jagged Alliance: Flashback on Kickstarter, which looks to explore the roots of the turn-based series. They say it's "not a reboot, it's a reset!"

Full Control want to take Jagged Alliance back to its original gameplay style, which was for a "thinking man with lots of guns!" We get RPG elements, base management and 80's hair! 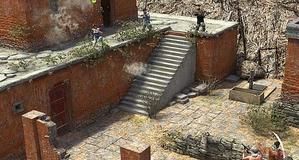