Sega has announced the September release dates for the reboot of their popular graffiti-centric rollerblade game, Jet Set Radio.

The full song list for Jet Set Radio HD has been revealed by Sega, and while some of the songs of the original are not present, it's still a pretty good set.

Jet Set Radio HD is coming this summer to Xbox 360, PS3 and PC. Fans of course want to know just what's been given the HD boost and what music has survived the transition.

To allay some fears, SEGA will be announcing more music news as we ramp up to release. Right now we get a teaser that's a mere 29 seconds long. Jet Set Radio HD at E3? 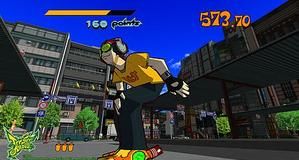