A fantasy mmo that's made ever more surreal by its art style and hidden beneath that is a grinding mega-fest.

Lineage II will be going free-to-play

NCsoft has announced that one of the largest MMOs in the world, Lineage II, will be going free-to-play. The conversion will be timed with the release of its upcoming update, Goddess of Destruction. The update is the largest in the MMO's history, which NCsoft claims features more than 400 hours of new content. 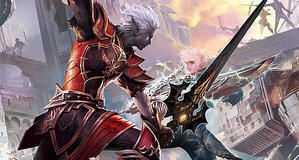