Techland learns from their failings with mediocre off-road racer Nail'd and tries again with Mad Riders.

Ubisoft has released the first content update for Mad Riders.

Sony has revealed this week's PlayStation Network releases and content for North America, which is highlighted by the full game download of The Amazing Spider-Man, along with a new Uncharted 1/2 bundle. Of course, the Mass Effect 3 Extended Cut is also included among this week's DLC.

Mad Riders hitting 29th May on PSN, PC and XBLA on 30th May

UbiSoft has announced that Techland's dirt racer, Mad Riders, will be landing on PlayStation Network on the 29th May, and Xbox Live Arcade and PC on the 30th. The developer is best known for its open world zombie apocalypse game Dead Island. 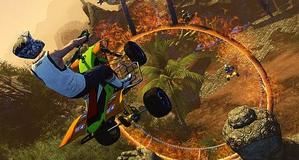