The one-man development machine Ede Tarsoly is almost ready to unleash the full version of his single-player RTS - Meridian: New World - with September 26th marked in our Steam calendars.

Meridian: New World will move into Phase 2 of its Steam Early Access run on Monday, May 5. Developer Ede Tarsoly will be hosting an AMA session and a live stream of the new version May 3 at 4pm GMT. You can watch it at this link.

A strange thing has happened. Going through my notes on the games that I saw at this year’s Gamescom, I suddenly realised that the majority of stuff I saw was related to strategy games. Weird. Whilst I’d love to do a dedicated write on each of these games (they deserve it), unfortunately time is pressing. As soon as playable code becomes available, be sure to see more in-depth coverage from me on these games. So, without further ado, here is a quick round-up on the best of the rest of strategy games at GamesCom 2013...

Single-player real-time strategy Meridian: New World has just received a debut trailer. It's an RTS with player decisions affecting the campaign as it progresses, and it's made by just a lone indie developer; Ede Tarsoly.

It shares some similarities with StarCraft II where players can 'chat' with their troops, and also equip them for the fights ahead. Tarsoly hasn't shown off much of the consequence of decisions yet.

Indie developer Elder Games - and the singular on "developer" is apropos, as the entire studio consists of one man, Ede Tarsoly - has announced a new science fiction real-time strategy game, Meridian: New World. 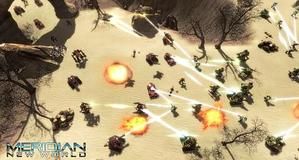