Is Monday Night Combat worthy of your points? (XBLA)

Today only, five popular Xbox Live Arcade games have a one day sale of 600 MSP, down from 1200 MSP. The titles include Limbo, Shadow Complex, Castle Crashers, Trials HD, and Monday Night Combat.

The PC version of Monday Night Combat has been delayed a week, according to a post by Uber team member Chandana "Eka" Ekanayake on the game's official Steam message boards.

They've also included a number of new options for private games to better customise them. Who could turn down the new Super Sudden Death Blitz? 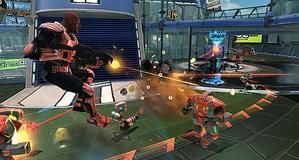